1. A robot may not injure a human being or, through inaction, allow his sleek, affordable Audi(R) to come to harm.

2. A robot must obey orders given it by the FedEx corporation except where such orders would conflict with the First Law.

Okay fine. So they took a few creative liberties. Such as demoting the main character of the book into the cute, quirky sidekick. And making up the hero and villain out of nowhere. And slapping the name of a hallmark of science fiction onto some script they had lying around. Oh, and of course adding so much shameless product shilling that the ticket ought to have been free. It's a movie, they're allowed!

But at least you don't have to trudge through this dry story of one robot's journey to humanity alone. Barely 20 seconds will pass by without hearing a hilarious sarcastic comment to lighten the mood, by your friend Will Smith! Oh, and also Chris Hanel, Dave "Danuuc" Atwater, and Todd Gutknecht.

So put on your Converse(R) All-Stars(R), cue up I, Robot and Riff Raff Theater's riff into your JVC(R) home entertainment system, and laugh 'til it hurts! (Because that's when your robot will stop you). 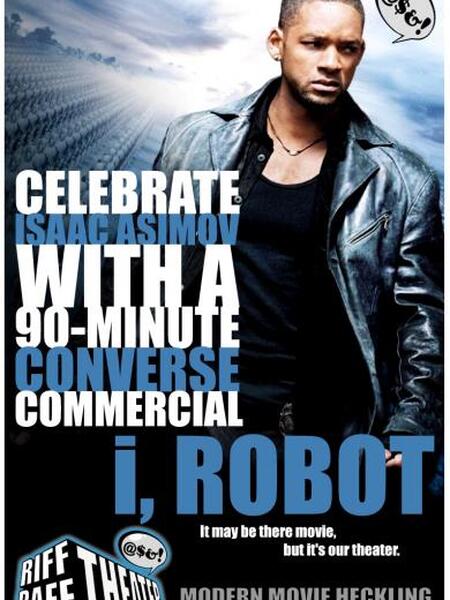