Here to answer that question is Riff Raff Theater, the masters of crowd-sourced movie riffing.

Lance Henrikson plays definitely-human-this-time Charles Bishop Weyland, a billionaire roboticist who discovers a lost pyramid under Antarctica and develops a bad case of dollar-bill-signs-of-the-eyes. Also, emphysema. He sends in the best resources and experts money can buy, but fails in every conceiveable way.

Sounds like a perfect stand-in for the studio suits.

Soldiers? Mercenaries? No, our heroes are an arctic tour guide, a "pyramid expert," a constantly-coughing old guy, and some other forgettable fodder. Though for you romantic types there's the will-they-won't-they of the title characters, and one man's undying love of his Pepsi-Cola bottlecap.

Find out along with riffers Chris Hanel, Dave "Danuuc" Atwater, and Todd Gutknecht that the whole is often less than the sum of its parts, in Alien versus Predator!

Note: We are riffing the original THEATRICAL version, *NOT* The “Unrated Director’s Cut”. On a side note, This DVD was one of the first to abuse the term “Unrated” with such shameless transparency as to make marketing people start to question whether they felt guilty for starting this trend. (This lasted for .52 seconds before they went back to serving as minions of Satan.) 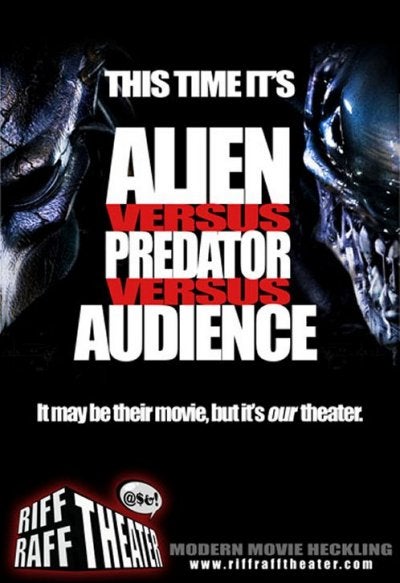