Journey back to 1986 and watch as a younger Arnie battles the mob, corrupt police and women having bad baking days in this Dino De Laurentis produced film.

After his son is killed during a mafia hit on an informant, FBI agent Harry Shannon (Darren McGavin) contacts his old friend, Mark Kaminski (Arnold Schwarzenegger), a disgraced FBI agent turned small town sheriff, and hatches a plan to take down the mob from within. Sam Wanamaker, Paul Shenar and Robert Davi play the people that Arnie gets to shoot at.  It's an hour and a half of bullet flinging Arnie goodness!

Join us as the folks at MattTrax guide us through a time when the Governator wasn't a household name and you could make a film with mobsters without casting Joey Pants or anyone from the Sopranos. Plus, you'll learn some fun facts about cows! 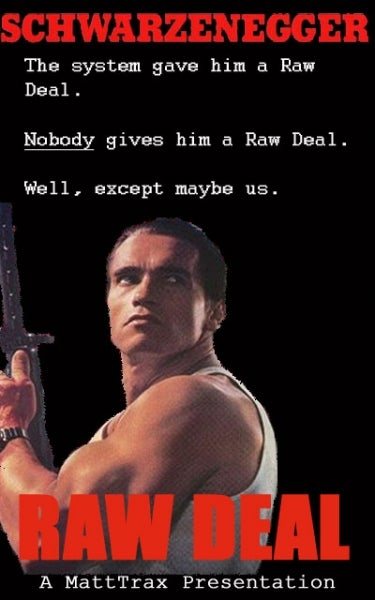