Did you like American Werewolf in London, but think that it was too competently made?  In your opinion, was the only thing missing from Frost/Nixon a dwarf making a Frankenstein monster in the basement of the pentagon?  If your answers were ‘yes,’ and ‘heck, yes,’ then the Orwellian Nightmare Society has something for you.

The Werewolf of Washington is a gem of a movie from 1975, following the exploits of a “fictional” president, besieged on all sides by the press, hippies and the constant chattering of distracting background noise, who hires a werewolf (played by Quantum Leap’s Dean Stockwell) that conveniently starts eating said president’s enemies (as well as political rivals and some random 70s stereotypical black guy).

With countless classic scenes shot entirely in the dark to characters that can’t be understood to the electrifying ‘Table Theme,’ The Werewolf of Washington provides a cornucopia of never ending delights* the likes of which have never been seen (mostly because of the fact that it is so poorly lit).

So, if all that sounds good to you, join us as Big Brother forces refugee in the future, Doug, and his roommates Phil and Mike to endure the horror of The Werewolf of Washington.

*Fortunately, the delights end after about an hour and thirty seven minutes.

This is a VOD presentation, and contains the riff and movie, pre-synced, as well as five host segments starring Doug, Phil, Mike and Big Brother.

Enjoy burning this stuff off on DVDs?  Well, I hope you enjoy these awesome DVD covers by Piobman! 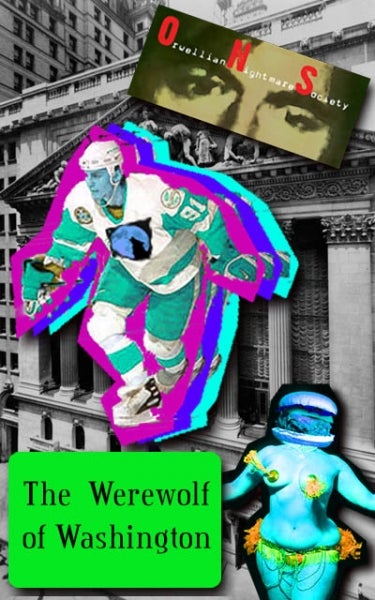