For schoolkids Jerry, Eddie, and Alice of the 1950's short "Ways To Settle Disputes," their miserable Twilight Zone-esque existence is filled with nothing but bitter, unceasing disputes on a bi-minute basis, among both themselves and everyone else they come in contact with. What, then, are three mere children to do in the face of such unparalleled dysfunctionality?

Enter "The Narrator." With the help of this unseen but talkative entity, the kids are guided through their plight by learning about various ways to settle disputes; methods such as compromise, obeying the rules, finding the facts, and finding opinions (which tend to contradict the facts). "Dance-Off" was also considered originally, but was ultimately rejected due to time constraints.

Anyway, though we ourselves felt the need to dispute about it, OPERATION: R.I.F.F. has ultimately decided to give its own brand of taxpayer-funded comedic commentary to this little slice of the 50's. Settle in and laugh along with Agent Declan and Agent Skyroniter as they riff their way through this Training Short, featuring the likes of kiddy fisticuffs, the goofy "Disputing Theme," Alice's Aliceness, bandersnatches*, and so much more.

*No need to look it up, because this short does it for you! After showing people disputing about it, that is.

(Additional R.I.F.F. correspondance by Agent F, who is not named Felecia Barbaro.) 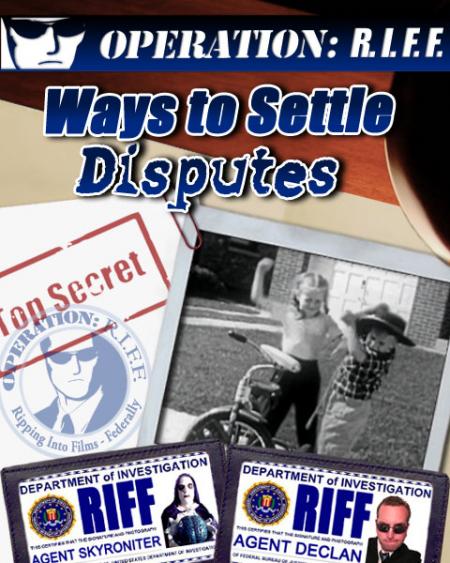