It is said that a room full of monkeys with typewriters will eventually write the works of Shakespeare.  If the Asylum's writing staff is actually following that policy, it will be some time before Shakespeare is in trouble, as Legion of the Dead continues their proud tradition of combining crap with...well, more crap.

Professor Swatek (Billy Peltzer, aka Zach Galligan of Gremlins fame) has found an ancient Egyptian tomb in California...no, seriously, that's the plot...and has brought in his students, a former student, and an accent-changing professor from Cairo to help study it.  Inside this tomb sit the remains of Aneh-tet, an Egyptian priestess who was banished from her homeland for being, well, power-mad and generally horrible.  One Evil Dead set of words later, and bammo!  Aneh-tet is awake, roaming the streets nude in search of souls to awaken her army...well, crew of six mummies, anyway...so she may conquer the world.  But there to stop her is...um...the former student (who wears shirts too big and shorts too small), her sister Kevyn (yes, she's named Kevyn...no, there is no reason for this), and Bruce Boxleitner as the sheriff, who seems to be the only one concerned about all the death that keeps piling up (and, if one scene is any indication, lives in a garbage dump).  Add in some bad cinematography, a nice, heaping helping of "I'm in another dimension" re-shoots, and editing that would make Neveldine/Taylor reach for the Tylenol, and you've got just another day of filmmaking at The Asylum.  And that's not necessarily a good thing.

Join the One Man Band, PPD, and possibly new compatriot Gary (an audit inspector who may not know what room of the bunker's he's going to) as they tackle what may be the worst film they've ever faced. 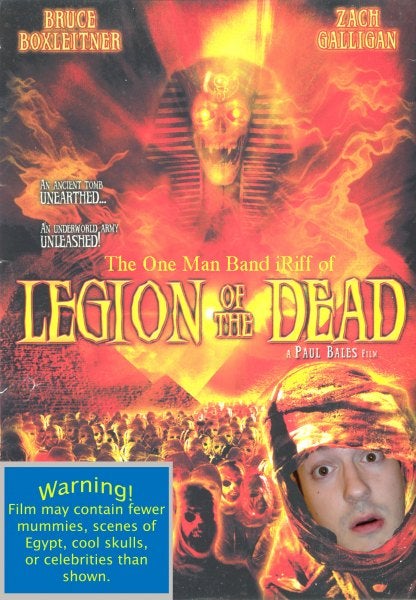