Once upon a time, a young Austrian man came to our shores, looking to become the most powerful man in the world.  And one day, he realized that dream, starring in the worldwide phenomenon, Hercules Goes Bananas.  But soon, his star fell, and he was forced to star in low-grade, low-budget films like Predator, Commando, and, of course, Conan the Barbarian.

Conan tells the tale of what happened to a small boy whose village was destroyed when James Earl Jones stopped by (though when you are in charge of the Death Star, you tend to leave paths of destruction wherever you go).  The young boy gets strapped to a wheel he is forced to push for many years, which gives you a body that months and months at L.A. Fitness seems incapable of delivering (never mind he never eats in all this time).  After many years of pit fighting and tawdry love affairs, Conan stumbles across a snake-worshipping cult, only to find by pure coincidence that Jones, now called Thulsa Doom, is in charge of it.  With his friend Subotai (not to be confused with Sukhothai, who make the world's greatest PP6 with Beef hands down) and 'girlfriend' Valeria, he plots his revenge on the maniacal wizard.  But with a voice that smooth, can Doom ever be stopped?

Though normally a loner, The One Man Band teams up somewhat reluctantly with k1 and k2 at OneWallCinema.  But the reluctance isn't to last, as not only do the Conan impressions come out fast and furious, but all ends well with a rousing musical number.  If you're not in tears by the end...well, then, you're just a jerk.  Or have no tear ducts.  In which case, we're sorry we thought you were a jerk.

Note: The DVD version will work with the widely available Extended Cut (the one with the close-up drawing of Arnie, NOT the one with him holding up the sword in the classic and much cooler looking poster art) and, with some finagling, the European Blu-ray, which is the same cut of the movie.  The Blu-ray version provided is ONLY for the U.S. Blu-ray, which had to be slightly different for reasons we still can't figure out.  Oddly, this version will also work until the very end of the original theatrical DVD version of the movie, at which point nothing will make sense.  That goes for our riff AND the movie, actually. 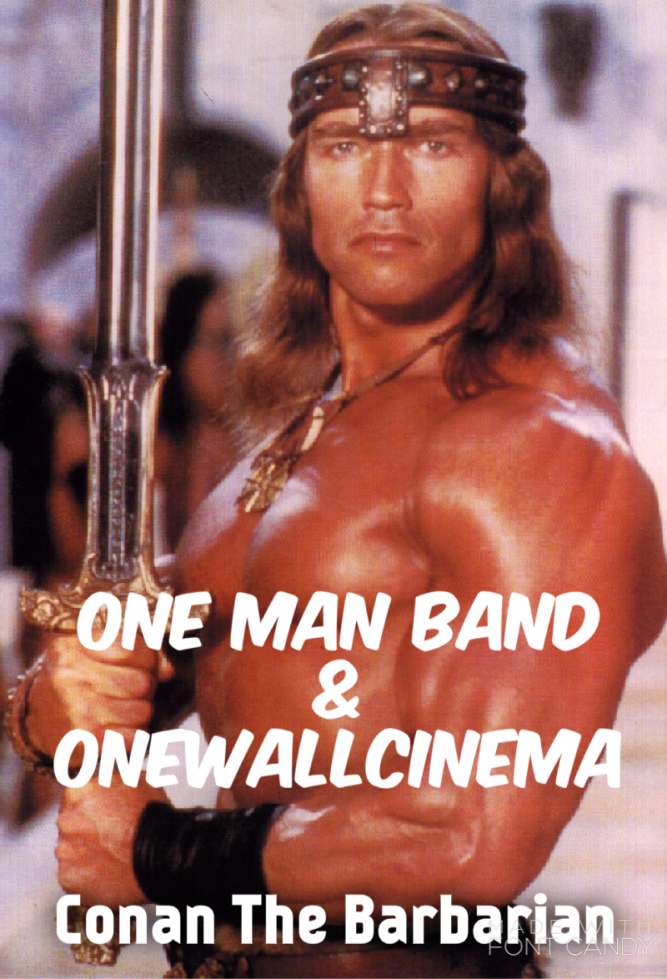