In 1960, Italy became the birthplace of a mildly shocking horror film known as "Seddok." It came to the U.S., re-edited and dubbed, as "Atom Age Vampire." And by "re-edited," I mean "cut entire important parts from the movie and reassembled them in whatever order they fell on the cutting room floor" and by "dubbed" I mean "hired several mumbly hobos who could speak like the Micro Machines guy to do all the dialogue." What may have once been a nice bit of creepy pre-"Zombsploitation" Italian horror became a laughable mess that even Ed Wood would think was excessive and poorly done.

Dr. Albert Levin (Alberto Lupo) is a man of SCIENCE! Having studied the effects of radiation on atom bomb victims in Japan, he believes he has finally found the cure for destructive skin diseases in his Derma-26. His latest victim...er, patient...is one Jeanette Moreneau (Susanne Loret), a club dancer who was once famous for her good looks before an explosive car accident ruined everything (and by ruined I mean caused barely noticeable scars that send her flying into whiny conniption fits). Unfortunately, the cure requires multiple applications, and Levin doesn't have enough Derma-26 to keep Jeanette cured (never mind he CREATED the stuff). The easiest way to get more...draining the glands of young women, naturally...is too much for the good doctor to handle on a moral level. So what does he do? Why, he injects himself with his previous Derma-25, which CAUSES radical mutation instead of curing it, and now that he simply LOOKS like a murderous weirdo, all his morals can fly right out the window. That's science for you. Anyway, as the killing mounts and mounts, it's up to Jeanette's boyfriend Pierre (Robert Goulet...oh come on, don't tell me you can't see the resemblance), who spends most of the movie in a bar flirting with other women, and the world's most unironically incompetent police chief, to rescue her.  And, of course, there's Levin's assistant Monique, his mute butler Sasha, and a reporter.  If anyone can figure out why the reporter is even in this movie, I'll give you a dollar.*

Finally, this PD 'masterpiece' is available with "Comedy Control," as the One Man Band provides a full-service VOD, complete with a handful of live action skits and the additional short, "Blasting Cap: Danger!" in which children run around a soundstage learning that blasting caps can be dangerous, if you hit them with a rock over and over again. And people say children TODAY have no common sense?

*Not a real offer. 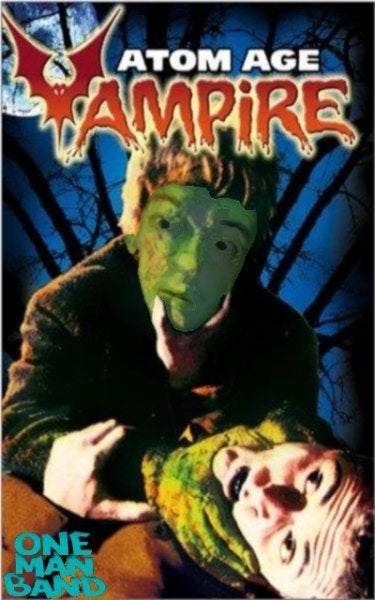