Ah, My Little Pony. With the internet's obsession with anime and cute pictures of cats, it was perhaps horribly inevitable that one day, all of us seemingly-heterosexual men would fall hard for a cartoon show aimed at six-year-old girls.

In the world of the Brony, Friendship truly is Magic ... that is to say, the real thing is so rare that you might as well settle for the fake kind.

Garrett Gilchrist, once a promising filmmaker, writer and artist, has spent the past year of his life drawing colorful ponies and purchasing pink plastic toys intended for small female children. It's fair to say that he no longer has any idea what he's doing with his life.

But this is no ordinary iRiff, fillies and gentlecolts. Neigh! It's far less interesting than that.

This is a director's commentary for the first two episodes, done as if My Little Pony: Friendship is Magic was a live-action series. You'll learn all the dirt and gossip on what those ponies are really like behind the scenes.

The humor is subtle rather than laugh-out-loud funny. It's improvised and very different from my meticulously-written iRiffs of Starcrash and Yor, Hunter From the Future. I wanted this to be strangely believable as an alternate universe - a seemingly true story that eventually your brain just goes along with, perhaps at the price of sanity. But then, dear Bronies, you already gave up your sanity to ponies some time ago.

You’ll learn all the secrets of:

1) Why Celestia is or isn’t pink

2) Why Luna isn’t in season one, and why her appearance changed

3) Why Twilight Sparkle needed to change her “image”

4) Which 80s My Little Pony star cameos in the episode

6) Which lead pony lives in a giant mansion

7) What even is the deal with Lyra

9) Why everyone knew to show up at Twilight’s party, and how they did it so fast

10) Absolutely nothing about Spike

You may never see ponies the same way ever again. Or maybe you won't find this funny at all. But it's cheap and it's pony, so go ahead and give it a try! 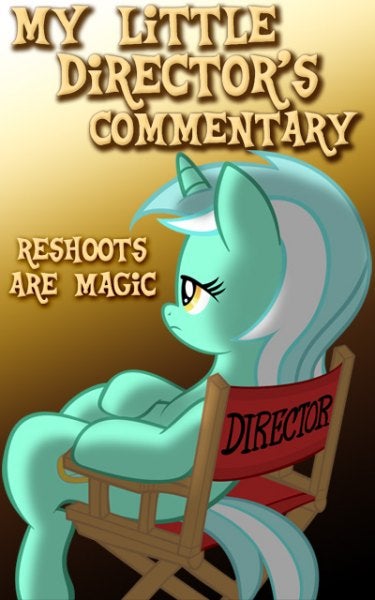