This iRiff is Chapter Two of the iRiffs Crossover Project #2.  Find the rest of the chapters here: www.rifftrax.com/iriffs/phantom-empire

As every school child now knows after the last ice age the continent of Mu sank into the ocean erasing it and its people off the map.  However some of Mu’s inhabitants continued on in caves accessed via the sea.  Just below the Earth’s crust Mu’s advanced civilization, possessing superior technology to our own, developed isolated and independent of the surface dwelling populations.  Nowadays it is difficult to imagine a time when we were not even aware of our brothers from down under (literally) but believe it or not their existence was a mystery to us but during the tumultuous times of the 1930s forces conspired to see these two people collide in a way that would shape the future of humanity forever.

While not a documentary The Phantom Planet painstakingly recreates these days of discovery in a dramatic series of episodes.  By episode two it is discovered by a Professor Beetson that large deposits of valuable materials, including radium, exist just below Gene Autry’s ‘The Singing Cowboy’s Radio Ranch.’  Unbeknownst to him, Autry, or indeed any surface dweller, that wealth of minerals belongs to the proud and powerful Murania Empire.  Located 25,000ft below the Ranch Murania is home to towering skyscrapers, deadly energy weapons, advanced robots, and a tyrannical queen sworn to defend it all.

Queen Tika is all too aware of the greed and barbarism of the surface dwellers and she will stop at nothing to keep her nation and her people safe from those who would simply take, and take, and take without regard to the future or to basic human decency.  She knows that the easiest way to insure the safety of Murania is to keep its very existence a secret and therefore does what any rational person would do; send wave after wave of bedazzled horseman to assault a radio station.  These “Thunder Riders” are the elite expeditionary forces of the Queen and serve as her right hand upon the surface world.  Their existence is known only in rumor, their deeds only whispered about, they strike like lighting and roar like thunder as they sweep across the land purging the Earth of those who would threaten Murania.  However, Autry and his young companions managed to escape the horseman’s fury and now begin to report to the world of their encounters.

Meanwhile, Professor Beetson works to prove that the Queen is right about the savagery of man as he unleashes a dastardly plot to frame Autry for murder so that he might explore and speculate the area in private.  With the help of his loyal friends Autry is able to escape and rides off into the wilderness in hopes of one day clearing his name.  The mystery has only begun to unravel, the players have only been introduced, the stage is set, the blood has been shed and the first salvo in the coming war is launched in The Phantom Empire Chapter Two: The Thunder Riders!

This product contains a VOD with a runtime of 21min in Mp4 format as well as the audio MP3 in a separate zip file.  The VOD is ready to watch and the MP3 is only included for those who would like to use it for their own DVD reauthoring.  The MP3 is not required to watch the short, no syncing is required, the video is ready to go; just press play. 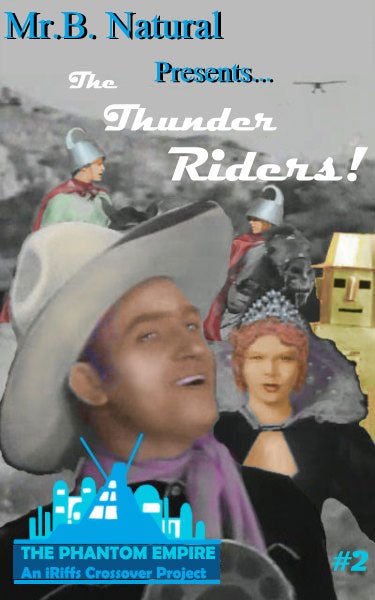