It's 1950.  WWII is over and America is entering into one of the most prosperous times in its history.  Innovation and might decides who the world's superpowers will be and ahead of the pack is the good ol' U.S. of A.  What is that propels us to the top of the food chain?   What is that makes us so feared and revered?  How is that we came to stand on the forefront of all human civilization? Atomic Power.  As the rest of the world struggles to rebuild and obtain their own nuclear arsenal the United States has begun research into all new atomically powered devices, including the next generation of advanced super weapons.

Such power and wealth always comes at a cost.  The light of our brilliance serves as a beacon to those who would seek power, and those who would seek to destroy us.  Enemies are everywhere, danger and intrigue is around every corner, and now it seems we have more than just our earthly bound brethren to fear.  We have attracted the attention of an ancient and advanced race who dwell upon the blood-red planet of Mars.  They have watched us for centuries with little interest or concern but now that we have begun to explore the possibilities of atomic power and weaponry it is clear we are threat not only to ourselves but the entire solar system.  As a first step in their plans the Martians make contact with one of our scientific and industrial leaders, a former Nazi sympathizer named Dr. Bryant, and it is soon clear they are not shepherds come to guide us along our new path.  They have come to conquer.

It is into this brave new world we are thrust, like a speeding meteor, where our humble hero Kent Fowler stands alone against the crimson tide of Mars.  Will he survive?  Can he survive?  And what of the human race?  See the first two chapters of this amazing tale, riffed, here for only 75cents! 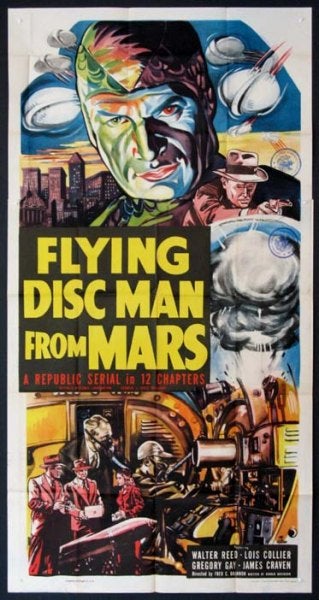