In preparation for the then-upcoming Mortal Kombat movie, a VHS tape was released that acted like an intro of sorts. Or remake of the first chunk of the movie. Or visual nightmare. Whatever you want to call it.

What we get is a 40-minute animated movie about two shirtless men and a woman with her panties on the outside of her pants who are stuck on a boat. They soon come across a wizard and a ninja, both of whom speak in the same pirate voice. Then a god appears to help them out and spends a half hour sharing exposition. He proceeds to have flashbacks to tragic fight scenes done in even more tragic CGI. Then our heroes fight a bunch of monsters and it sort of just ends.

Oh, and Kano isn't in it for some reason. Go figure.

It's on the Mortal Kombat Bluray, but let's be honest with ourselves. This is the internet. It's really easy to find and I don't think anyone involved with its production cares. 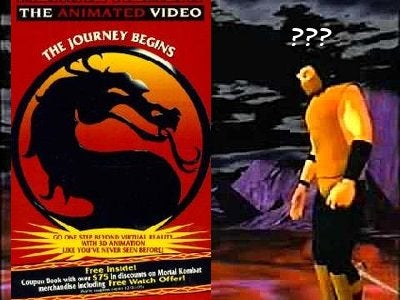