How do you follow up a commercially successful PG-13 version of an R-Rated videogame?  Why, with a commercially UNsuccessful PG-13 version of an R-Rated videogame!  Like a sinking ship that replaces its fleeing rats with small, confused frogs, Mortal Kombat: Annihilation replaced most of its original cast with people who really had no idea what they were in for.  And what a shameful pile it is: Shao Kahn (Brian Thompson, that guy who played the big creepy guy in The X-Files) is trying to merge his realm with ours with the vast powers of purple tinting.  He does this through the use of Sindel, the Skunk Queen (Musetta Vander, the one who played that one with the whip in Oblivion), who he brought back to life in order to keep portals...you know what?  Forget the plot.  It all exists to put together a loose volley of fight scenes, glued together by appearances of characters from the games who disappear as fast as their paychecks will carry them.

The One Man Band faced down the threat once before, and he'll do it again.  And in the process, he'll find answers to all the big questions, like: What IS the secret power of Banana-Phone?  What does Shao Kahn put into his smoothie mix?  Who keeps setting the throne room on fire?  Who blackmailed Robin Shou and Talisa Soto into coming back for the sequel?  And why, oh why, are you stronger without cybernetic strength enhancers?

Don't miss the antics as the One Man Band's top brass decide to do a little 'replacing' of their own...including a very cranky Sarge Crumley.  Also, the PPD-3200 shows off his new language skills and the slight hint of a competitive side.  But through it all, the One Man Band always manages to land on his feet...even if those feet are still in a military grade bunker deep underground. 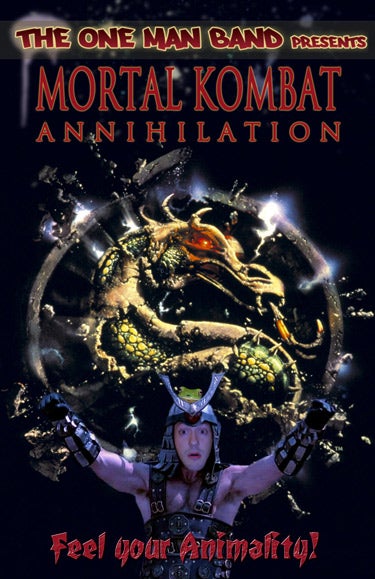