Ostensibly a prequel to the inexplicable 1979 hit The Amityville Horror, A2 tells the story of the Montelli family, who move into the infamous house of evil. The movie wants us to believe that Ultimate Evil took a fine, upstanding middle class family and turned them into dysfunctional, sexually abusive assholes, but the Montellis seem to have at least brought the abusive asshole part in with them. After engaging in a few petty poltergeistesque shenanigans, Ultimate Evil decides to take possession of the mind and body of the eldest Montelli son, Sonny. (It wasn’t hard. Both his mind and body were unclaimed at the time.) Soon after, Sonny’s sexually abusing his teenaged sister and acting slightly creepier en route to murdering his entire family. After the murders, a priest swings into the plot to try to perform an exorcism, which, for reasons known only to the screenwriters, has to be performed at the famous Amityville house. A few scenes of exorcism-fu later,  Sonny’s dispossessed (though facing five consecutive life terms for his murders), and the priest now houses the soul of Ultimate Evil, though in the plus column that makes him the owner of a lovely three-story Dutch Colonial with a boathouse.

Jim’s Take: Some films begin great, some become great, and others have greatness thrust upon them. Amityville 2 is none of these, and less. There are reviews out there claiming it’s the best of the misbegotten Amityville series, and that may be true. Sure, it’s a morally reprehensible geek show full of domestic violence, sex abuse, tired gross-out moments, and borrowed plot points from the first Exorcist movie, but at least there’s stuff going on. This puts it one up on the original, as well as the 1989 TV movie that revolves around a haunted lamp taken from the Amityville house. (Seriously, in the 1980s you could scribble down any half-assed horror concept, put Amityville in the title, and Dino De Laurentiis would cut you a check for $100,000.) But the sweetest smelling cow pat in the pasture is still a cow pat, and so it is with Amityville 2.

Casey’s Take:  I cannot remember the last time I wanted to leave a movie because it was so bad.  Even movies like The Room and Troll 2 have their charm with how they are hilariously, horrendously bad.  But with Amityville 2, it’s that…pitiful bad, that awkward bad, that makes you not want to sit through it.  You feel bad for all the GOOD horror movies it has poorly ripped off, bad for the cast trying to commit to a weak, contrived script that completely strays from the original, and bad for the people who actually sat in a theater to watch this distressing 105 minutes of “Ugh.”  But Fear Not!  I’ve always believed that if you can’t enjoy a story from any medium in a straight-forward sense, you can find a way to enjoy it through ridicule and through satire.  Jim and I have put quite a bit of work into taking this “uncomfortable” horror movie (which takes itself way too seriously), and giving you a gateway to enjoy it:  By pummeling it to death.  And I do hope our musings help to make this drivel-laden movie bearable, and just MAYBE…enjoyable. 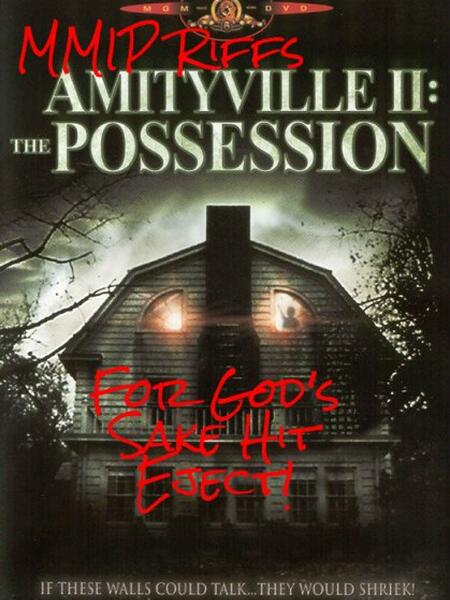