Legion: The One Man Band

Legion: The One Man Band

A movie where God is the bad guy.  In most circumstances, this would lead to cries of sacrilege; in the case of Legion, all it led to was cries for money back.  So utterly brainless, pointless, and idiotic, you'd be too busy wondering how this got greenlit in the first place to be offended.  Thankfully, for those willing to sit through this, the One Man Band steps up and gives the movie the riffing it has long since deserved...and it only came out in 2010, for Pete's sake.

God (who lives comfortably on his base on the moon, according to every establishing shot) has decided humanity has been rude to each other for quite long enough, and has decided to wipe out humanity the way the devil has for years: by having his angels possess them and run around tearing apart anyone they see (a plan that seems utterly foolproof when weighed against earthquakes, floods, meteor showers, and possessing the holders of the world's nuclear launch codes, doesn't it).  Paul Bettany is Michael the archangel (and thoroughly British), who has willingly rebelled against this plan because he still believes in humanity.  And how does it show it?  By holing up in the dirtiest desert diner he can find and protect the unborn child of Charlie the Waitress.  Can they hold out against the hordes long enough for the child to be born?  Will Dennis Quaid take his paycheck and go home?  Why is Charlie's boyfriend named Jeep?  Can Doug Jones' career survive his 30-second appearance as a creepy ice cream salesman?  Will somebody even more British than Paul Bettany show up and cause trouble?  And really, the boyfriend's name is Jeep?

With a wit as sharp as the Heavenly Army's shark teeth, the One Man Band tears into this travesty and doesn't stop until it returns to the seventh layer from whence it came.*  Also, don't miss the fun when God Himself arrives to pass judgment on the One Man Band...or, at least, someone who sounds a lot like him.

*Some wit derived from ten minutes of research via Wikipedia, which is a lot more research than anybody clearly put into the screenplay. 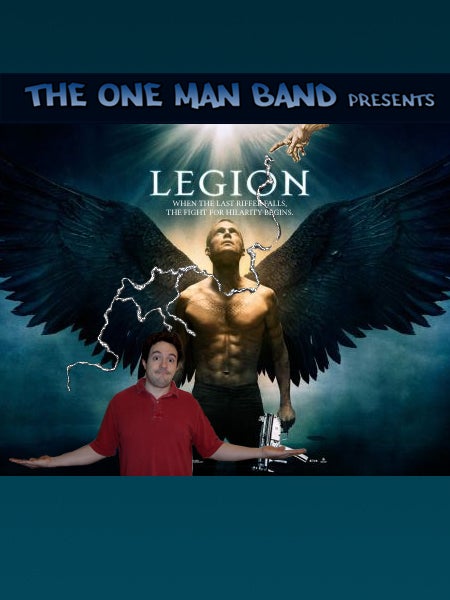