Ray has everything. Good friends, good family, and a death grip on the state's extemporaneous speaking competition. Now that he's the newly elected class president to boot, nothing can stand in his way. Grasping the very fibers of the universe, Ray plays with time and space like they were marionettes. Enter womankind to screw the whole thing up! How will Ray deal? Join "Just Andrew" as we explore Ray's complex inner workings of aggressive domination, unadmitted longing, and a buzz cut that makes Howie Long jealous.

Contains both the audio and video track, skillfully merged for your pleasure. 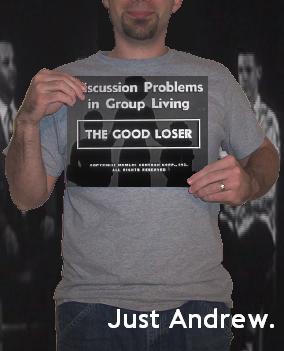