John Carpenter's The Thing, as presented by ApexNerd

John Carpenter's The Thing, as presented by ApexNerd

Whereas years earlier, Steven Spielberg's Jaws made America afraid to go into the water, John Carpenter's The Thing made America afraid to go into theaters with a serving of nachos. The term "Gorn" (pornographic levels of gore) from TVtropes.org was inspired by The Thing, which pioneered the Too-Much-Information approach to autopsy imagery almost 20 years before the pilot for the first CSI series began principal photography.

The Citizen Kane of Gorn, John Carpenter's The Thing was met in 1982 with an indifference normally reserved only for the public education system, the WNBA, and global warming. Eventually, the film found its true audience the way most cult classics not named The Rocky Horror Picture Show often do... through home video. While not Carpenter's most commercially successful film, The Thing remains a work in which he takes great pride and is now recognized as one of the greatest horror movies ever made.

This iRiff is done "Fan Boy Style". It seeks not to laugh, point and snark mockingly at John Carpenter's The Thing; it seeks instead to laugh, point and snark mockingly with John Carpenter's The Thing. This iRiff conspicuously (and often narrowly) avoids stepping on the original film's dialogue. To facilitate making the iRiff as funny as possible, that is the only courtesy extended to the original film.

This iRiff doesn't include any bonus features such as skits, songs, or a Corinthian leather interior. It just riffs on the movie and then stops. 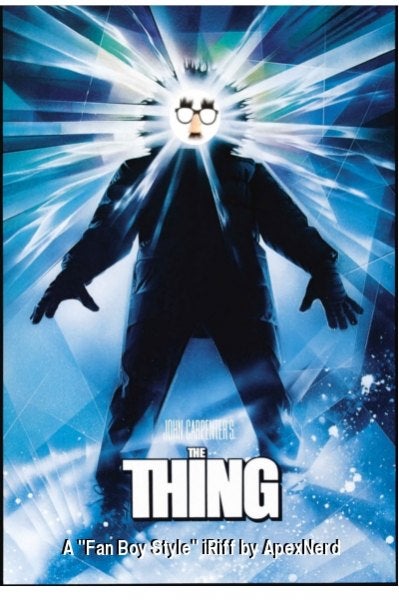