Join Commander Rick Wolf, along with his robot pals Johnny Cylon and Topsy-Bot 5000 as they’re forced to sit through the trashy horror epic Lady Frankenstein.

Italy’s take on the classic tale is the smuttiest one to date! After the Doc’s phallic-headed monster bear hugs him to death, his foxy daughter Tonya decides to use his lab as a boyfriend factory!

It’s a steamy love story for the handicapped, as Tonya seduces not only her father’s crippled lab assistant, but their mentally challenged stableboy! Be among the first to see the second episode of the series being hailed as one of the least awful underground riffing shows around!

This product is a Video On Demand offering! When you buy it, you'll be given a high quality DivX format and a lower-quality m4v (Quicktime) format that is perfect for your iPod or other portable device! For the DVD version, click here!

Both versions are DRM-Free! No special player or Divx account needed! 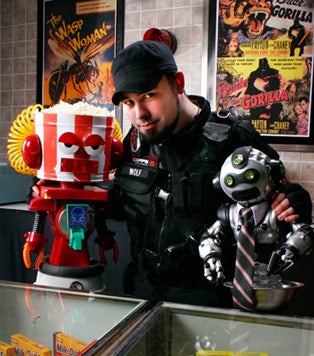