Ice Pirates: The One Man Band

Ice Pirates: The One Man Band

In 1984, Stewart Raffill wrote and directed "The Ice Pirates."  He would later direct "Mac and Me" and "Mannequin 2: On the Move."

If that doesn't clue you in, I don't know what will.

The One Man Band, already in enough of a pickle having to watch the movie in the first place, is in double trouble when he wakes up to find the rocket containing the film he tried to stop has been drifting through space for 3 million years, and the only companion for light-years is the PPD-3200, a "terminally cheerful" computer program.  With friends like these, who wouldn't prefer an hour and a half of pure torture?

As for the movie itself, TV stars Robert Urich and Mary Crosby lead a (nearly) all-star cast, several of whom not only survived the film itself, but surprisingly had long careers afterwards...and if there's hope for Ron Perlman, there's hope for ALL of us!  Princess Karina lost her Daddy years ago when he went searching for the 7th World (and when he'd rather be on another planet than with you, he might be telling you something), a planet rich with the scarce resource of water.  Naturally, what better way to find him than to join up with a scruffy crew of pirates, led by the mostly incompetent Jason, all the while dodging the evil Space Templars bent on keeping anyone from finding the planet and screwing their monopoly on drinkable substances (apparently no one has heard of desalinization plants).  On the way, they'll nearly lose their naughty bits, tempt frog alien-women, experience racial slurs, do the time warp (again), and, of course, fight Amazons riding unicorns.  What, doesn't every space epic have unicorns?

And as an added bonus, this iRiff comes in two distinct flavors: the first is the traditional iRiff we've all come to know and love, and a special "Stupend-O" edition, complete with skits built right in!  Just pause the movie when the audio prompts you, and you'll hear a short skit between the One Man Band and the PPD-3200.  And don't worry about pausing and unpausing perfectly...each skit occurs right near a sync line, so you'll have no trouble lining back up!

The Ice Pirates!  Just when you thought Episode II was the worst space epic ever!

NOTE FOR PAL USERS: The PAL edition of the film is difficult to come by; if you cannot play NTSC imports, this edition may definitely be found on Amazon.de (though in German, it contains the English language track as well), although other vendors may carry it. 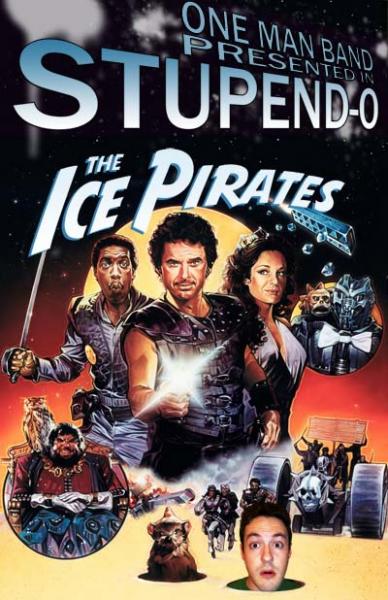