Ice on Mars vs. The Karate Kid

Ice on Mars vs. The Karate Kid

Once every century (so far, and only counting the last century and the current one, but definitely every century since film was invented) there comes a movie about an older Asian man teaching a young American kid the ancient secrets of karate so that he won't get his ass kicked on a daily basis. There are probably sequels involved, as well, but that doesn't detract from the central thesis here.

In the 1980s classic "The Karate Kid," Ralph Macchio portrays a conflicted young man (Daniel) whose emotions for Johnny (William Zabka) keep boiling over, causing fights to break out over the smallest of things (like Elizabeth Shue), misdirected rage turning into flying fists and kicking feet. Soon, however, a cantankerous older man who knows too well the pang of regret that can grow into a shard buried deep in the heart when a love is denied takes Ralph in and teaches him how to channel his frustration into something meaningful: karate.

Join riffers Scix Maddix, Ari Dennis and J. Wilford Neville for this tortured, twisted tale of passions repressed. You might notice that Michael is NOT a riffer on this, but fear not! He was still head writer (J. Wilford and Scix were the other writers), so you'll still get the usual Ice on Mars quality and style. Plus he joins Scix in riffing the short "The Wheat Farmer: Second Edition," also included in this release!

Though the main riff is only maybe a hard PG-13 or a light R, the end credits are definitely uncensored and contain words of an adult nature, so you're forewarned.

All of these songs have a "copyleft" sort of rights to them, which stipulate that though they're free for use and remix, they cannot be used for commercial gain. So though the end credits have been placed onto the main mp3 track for ease of reauthoring and/or listening, they are also available for free at any time at:

and you are free to download them without having bought the KK riff, and so are ALL YOUR FRIENDS. Enjoy! 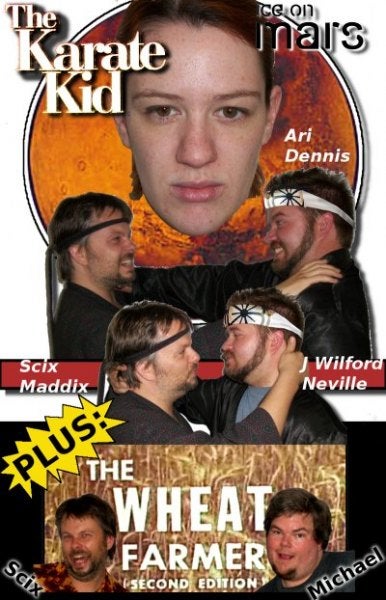