Oh, the past, when anyone would make a film about anything, it seems. "Girls Beware" is a short, dreary film about how men are nothing but rape-a-saurs, and "Mother Takes a Holiday part 1" is the first half of a bizarre tale concerning how the new Whirlpools are a triumph for women's liberation because they make doing laundry SO MUCH EASIER. (Whoever thought this up in the Whirlpool marketing division is either a mad genius or a very, very cruel bastard who should be shot multiple times in the face. Possibly both.)

On "Girls Beware," Michael is joined by Vanalys (NOT the Greek avant garde composer Vangelis, although we're working to secure him as a co-riffer in an upcoming release) to learn why women should either never trust or be happy being dead or raped (to death). On "Mother Takes a Holiday," Michael is joined by Cindy Ward (NOT Cyndi Lauper--why would you even think it was Cyndi Lauper? Their names are nothing alike! Shut up!).

If you've perhaps glanced at the Ice on Mars library and have been curious, or already are a fan, then this nearly 25 minutes of "briefs" should be right up your alley, as either a teaser of their style for a cheap price, or just something else to be stacked in a folder like so much cordwood.

While neither of these contain much "coarse" language (I think "bitch" is the "hardest" term in here), both have some fairly intense sexual overtones, so I felt putting the parental advisory sticker on was worthwhile.

I tried. Oh, how I tried to come up with a clever play on the term "shorts," but it's just been done SO MANY TIMES already, so I figured, what the hell, go with something similar; hence, briefs. Despite being a boxer man myself, I'm fully endorsing these briefs. 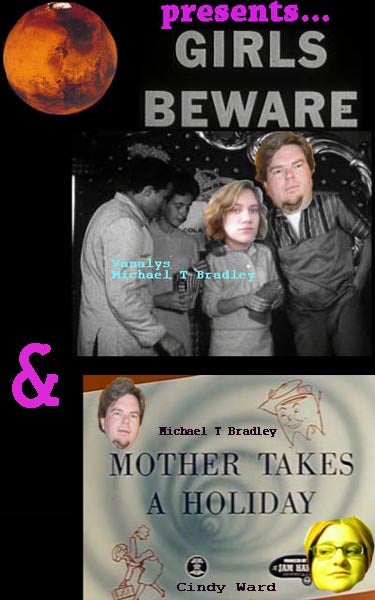