Howling II: Your Sister Is a Werewolf - GOTBBC Episode 1

Howling II: Your Sister Is a Werewolf - GOTBBC Episode 1

NOW IMPROVED! Now when you buy our iRiff of HOWLING II: YOUR SISTER IS A WEREWOLF,  our animated Intro and Epilogue videos are included right in the package! No more having to look them up on YouTube! Not only that, but you're getting more for less: our HOWLING II iRiff is now on sale for only 75 cents!

Why so cheap? Two reasons: 1) It was our first episode. We've done several more in the last year, and with practice we've gotten a little (okay, maybe a lot) better. So a discount for our "first run" is only fair. 2) Here at GHOSTS ON THE BIG BROWN COUCH we like to slash prices and pass the savings on to YOUUUUUUUUUUUU!!!

That wasn't over the top, was it?

Note: To get the full Ghosts experience, after payment be sure to download the file named "Howling II - GOTBBC Ep. 1 Deluxe Packaging.zip". That is the new updated set of files.

You would think that once you were dead things couldn't get much worse. Well, you would be wrong, then, wouldn't you? At least, that's the case for Dori, Becky, and Babs, three roommates who fell to their deaths from a five-story apartment as they were arguing over whether or not they had to watch THE MONSTER SQUAD, Becky's favorite film. Now, under sentence from The Grim Reaper, the three lovely ghosts must spend eternity sitting on the big brown couch in their old apartment, watching movie after movie until they find one they all agree that they truly love. Unfortunately, old Grim is cheating the ladies by sending them some of the worst films ever made.

In their first episode, the Ghosts (and new, living roommate Johnny)  have to face 1985's HOWLING II: YOUR SISTER IS A WEREWOLF. The horror! Shudder as the usually-reliable Christopher Lee shares the screen with Reb Brown, finding himself trapped in one of the silliest werewolf films ever made! You'll say to yourself, "Reb Brown? Isn't that Dirk Hardpec?" You'll feel slightly better as Sybil Danning is all sexified as Stirba, Queen of the Werewolves! You'll wander into the kitchen for a snack as you realize that there aren't actually a lot of werewolves in this werewolf movie! All this and more, as The Ghosts on the Big Brown Couch and YOU take in HOWLING II: YOUR SISTER IS A WEREWOLF!

This iRiff includes a Sync track (fully tested) to make it work with the official RiffTrax RiffPlayer, as well as instructions for manually synchronizing the track for those who choose not to use the player (the iRiff includes thirteen synch lines). Both NTSC and PAL versions of the iRiff are available (although a Sync track is only available for the NTSC file). HOWLING II DVD or video not included, but easily available for rental through Netflix, and for purchase through Amazon.com and other retailers (it's even available on a double feature with the original Howling, if you want to see an actual good movie too).

Every episode of Ghosts On The Big Brown Couch includes an animated video introduction AND epilogue. Get to know the Ghosts and Johnny, then share in their pain as they take in the pure 80s cheese that is HOWLING II: YOUR SISTER IS A WEREWOLF.

Thanks to Mike Nelson, Bill Corbett, and Kevin Nelson, for providing the venue for this project, and to actor/television host Jonathan Llyr for his announcing contributions for this episode. 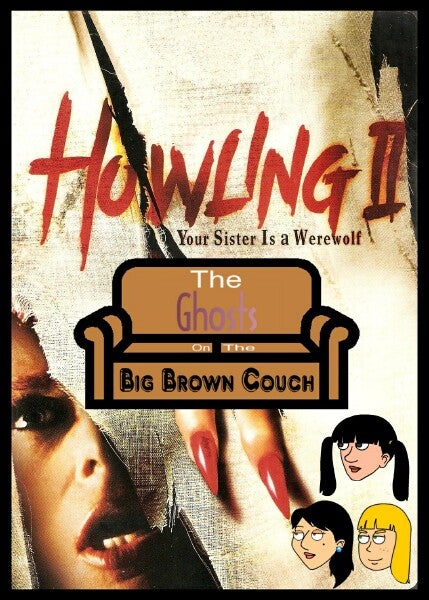