Howard The Duck: A Vox-O-Rox Adventure

Howard The Duck: A Vox-O-Rox Adventure

What comes to mind when I say "the worst movie ever made"?  Manos?  Battlefield Earth?  For some people, it's Howard the Duck.  One of the most notorious turkeys to ever hit the big screen has come home to roost at iRiffs.
This very worthy recipient of a Worst Picture Razzi follows the adventure of Howard, a duck from another planet, who is sucked through space and falls to Earth in Cleveland.  There he meets Beverly, played by Lea Thompson, the singer in a typically bland 80s pop band.  Over the course of the movie he matches wits with Tim Robbins, attempts to find a job in Ohio (yyyyeah, right!) and goes bill-to-tenticle against a horrendous monster that was also sucked (there's that word again) through space to Earth.
In this movie you'll find super-frizzy hair, bad duck puppetry, stop-motion monsters, implied alien duck-on-woman bestiality, and the mother of all earworms in the theme song.  In this riff you'll find myself and a special guest gettin' duck wild and makin' with the funny... and a little reinforcement of the afore-mentioned earworm, muah-ha-ha-ha-HAAA!!
Please be aware that, much like the movie itself, the riff might not cross fully into "adult" territory but it does include some language and a few other things you probably don't want your grandma or little sister to hear.  Oh, and be sure you read the "readme" file.  It includes some very important information about syncing the riff.

**PAL viewers please note: Only the UNCUT version works with this riff.

**If you watch it, PLEASE rate it and leave a brief comment. We're not in it for the money. 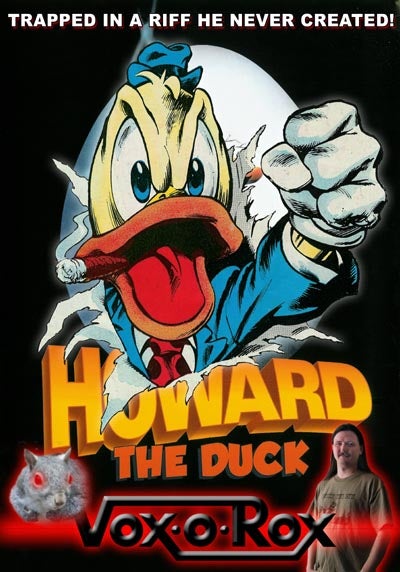