Harass Bastards-Return of the Jedi

Harass Bastards-Return of the Jedi

A long time ago, in a galaxy far, far way, the final chapter in an epic saga was complete. But enough about the final episode of "The OC". Instead, let's talk about the Return of the Jedi. A movie where Jedi use rocks instead of lightabers. Where cute little teddy bears wage war on a huge military force. Where a planet-killing battle station crew takes their orders from a senile old man with a horrible skin condition. Where galactic crime-lords have nice little sleepovers while anyone can just waltz in unannounced.

The Harass Bastards put the "special" in Special Edition as they embark on the monumental harass of Return of the Jedi. Prepare for greasy slugs, a smirking Harrison Ford, a lucid Carrie Fisher, and a comatose Mark Hamill.

NOTE: This track was done using the Special Edition cut of ROTJ. So scream in Nerd Rage as you see Hayden's smirking maw in spectral form!! 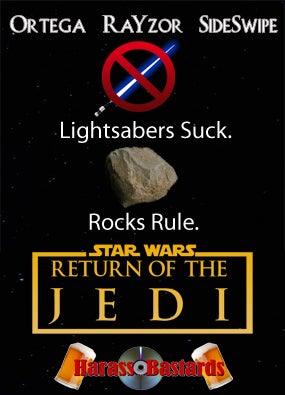