{...but albeit sometime after All's Quiet on the Western Front...}

there was - Gung Ho!   No, no!  Not that wimpy, liberal Hollywood Ron Howard comedy film from 1986. Oh no: This is Gung Ho! - The 1943 war epic extraordinaire, starring Robert-'I'll-have-a-career-in-REAL-movies-someday'-Mitchum.
No big deal- I'm just saying it was made in 1943, before all those other, 'better' films came along, that's all. Yes, Gung Ho! was made first. It's still a factual statement, so technically it's not false advertising...

Yes- the year was 1943, and America {as usual} was at war- doing what America does best: Fighting wars, and making movies about America fighting wars.

It was a simpler time...

It was a time when a man wasn't a man, unless he was a chain smoking, racial epithet spouting, ethnic stereotypical, politically incorrect, two-fisted flag-waving, grenade-tossing, jingoistic-slogan spewing, patriotic, half-psychotic, killin' machine!

And woman wore gingham dresses, and talked a lot about pie.

Gung Ho!
It's about Freedom. It's about Liberty. It's about Democracy. It's about blowing stuff up for your country.
It's got Robert Mitchum in there somehow.
Plus there's a part with a submarine, and a big battle at the end.

Want to find out how you can become a partner in victory? Do your part: Download it from Rifftrax today- It's your patriotic duty.

BASEMENT DWELLERS RIFFS, {J. Garth Wilcox & Jeff Morlock} take you back to the more innocent times of  World War II to prove once and for all that old propaganda films just don't age very well. And please, buy your Liberty Bonds today.

BASEMENT DWELLERS RIFFS - There we go again, for the first time ever!

THIS IS A VOD. IT COMES WITH MOVIE AND RIFFING ALREADY COMBINED! 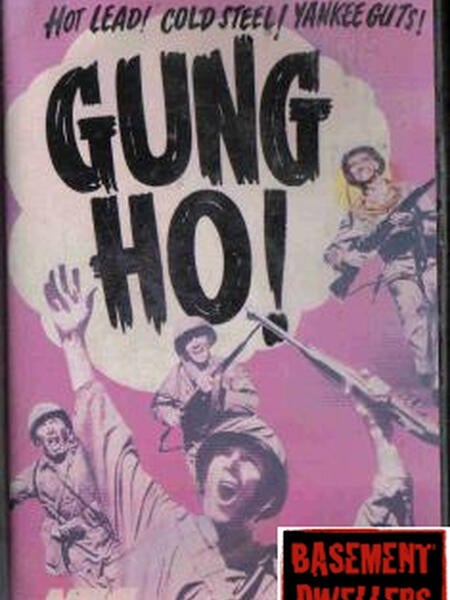