Ghost Stories - Episode 1: Tonight the Spirits Will Be Resurrected! Amanojaku

Ghost Stories - Episode 1: Tonight the Spirits Will Be Resurrected! Amanojaku

What's dead, pale, and hangs out in old schools? Besides Michael Jackson, ghosts. Five (so-called) children find themselves wandering into an abandoned schoolhouse, looking for their respective plot devices, when they encounter what Americanized anime producers marketed as horror-larity!

Two brave "psychical researchers", David "Cleveland Rock" Hawley and Tom "Heisanevilgenius" White (with the help of their synchronization robot "CHRONI"), provide commentary on this (almost) horrifying turn of events, making more geeky pop culture references than cheesy anime dubs and Mystery Science Theater 3000 combined. Just buy it; 75 cents is like half the price of a can of soda.

Thanks to the comedic dub by ADV Films, this series is a must-see for anime-lovers and anime-haters alike. Buy the DVD and start enjoying the series as soon as possible. Or you can watch a low-quality illegal rip from some web site FOR HOOLIGANS.

Oh yeah, and check out the riffs on Tom's own account, while you're at it. Hell, mine, too. 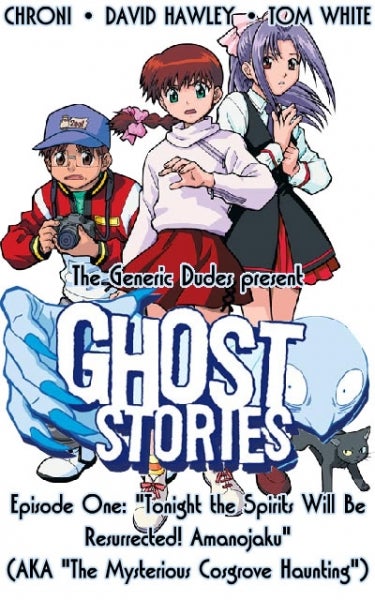