Gamera, self-proclaimed guardian of the universe (ashamedly trying to work his way out of his previous title as friend of all children) is back and he brought Insert Coin(s) to Continue with him again on his final 1990s adventure in the thrilling conclusion to the 90s Gamera trilogy -- Revenge of Iris!

Ryan Hamann, aka Insert Coin(s) to Continue, guides you through familiar territory as the flying turtle does what he does best -- kick some serious Power Rangers villain reject butt! Re-watch the events of Guardian of the Universe through the eyes of an average Japanese girl watching her family be crushed by the (admittedly much cooler looking than I ever remember him looking in that movie) hulking, green presence. Seeking revenge, she calls upon the soul of her ... dead cat ... or ... something ... and she ends up finding the baby from Eraserhead in a cave, and that grows into ... look, you're just going to have to see it for yourself. As always, it's a fantastic kaiju movie in it's own right, and it's spiced up with some delightfully eccentric acting moments and disasterously out of place voice acting.

Also, the kid-friendly Gamera directors experiment with the oft-dreaded combination of effeminite boys, Japanese schoolgirls, and ... tentacle monsters?! Oh God! Not a Gamera movie! For the love of all things kaiju! Buckle down. It's more fun than you could flatten an overpriced apartment complex with. 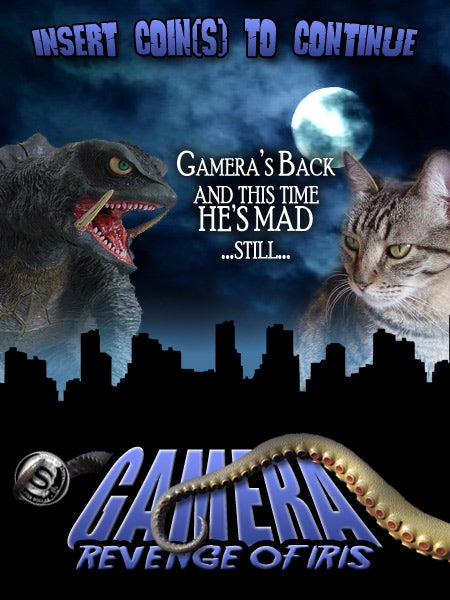