Gamera is a staple of movie riffing. Ever since 5 of his classic films were riffed on Mystery Science Theater 3000, fans have fallen in love with the giant flying turtle billed as the friend of all children. After disappearing for a number of years, Gamera made his re-emergence from his shell onto the silver screen in the 1990s (the Heisei era of kaiju films) with a stunning film trilogy. Probably the best kaiju films ever made, the Guardian of the Universe series has everything you could ever want. Over the top action scenes, great creature effects, and ridiculous voice acting, just to name a few of its many attractions.

Long time fan of Gamera and movie riffing alike, Insert Coin(s) to Continue takes you on a comedic journey through the dangerous streets of Tokyo as Gamera and his friends stomp about. Meet the annoying, toothbrush-offering Mr. Saito, the brave, tomboyish Asagi, and, of course, the most out-there taxi driver since ... well ... Taxi Driver.

Included in this pack are the commentaries for Gamera: Guardian of the Universe, Gamera: Attack of Legion, and Gamera: Revenge of Iris.

All three commentaries (for a lower price) and a couple of tiny bonuses to show my appreciation for all of you MST3K and RiffTrax fans in the audience. All in all, this pack is more fun than you could fill a baseball stadium with! 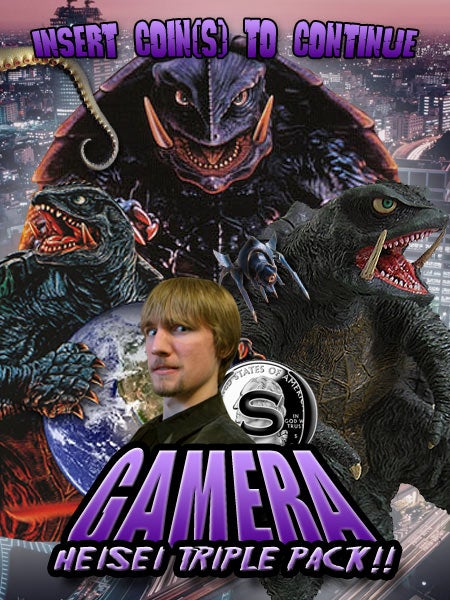