Brandon Routh pics up the torch from Christopher Reeves and dons the blue tights (hopefuly not the same pair) as the Man of Steel.  After a five year absence Superman returns from a visit to the remains of Krypton to find that Lois has moved on without him and now has a son and a new man.  Of course being the man of intergrity he is he immediately begins stalking her and trying to persuade her to leave her fiance.

Meanwhile Lex Luthor (played by Kevin Spacey who is desperately trying to convince us that he's Gene Hackman) has been released from prison and by sheer coincidence has begun his plan for world domination at the exact same time Superman returns.  His plan:  swindle an old rich lady out of her money, take her boat to the oddly unsecured fortress of solitude and find out if there is anything evil he can do with crystals.  It's a rather vague plan and leaves one with the question of what he would do if they were only good for making goblets and fine butter dishes.  As luck would have it though, he discovers that with a crystal, some water and a little love he can grow his very own continent.  And you thought Chia  Pets were fun!  So Lex decides to do just that and seems to get a thrill out of knowing that he will kill millions... no BILLIONS of people in the process!

Can Superman stop Lex?  Will Lois file a restraining order against the Man of Steel?  And why in the world is Parker Posey's character dressed like she just stepped out of the 1940's?  Find out all this and more (okay, we never actually find out what the deal with the outfit is) as I attempt to make Superman Returns palatable in my very first iRiff!

The NTSC file is now perfectly synced.  If you already own this it should be in your list of files.  PAL will be replaced ASAP. 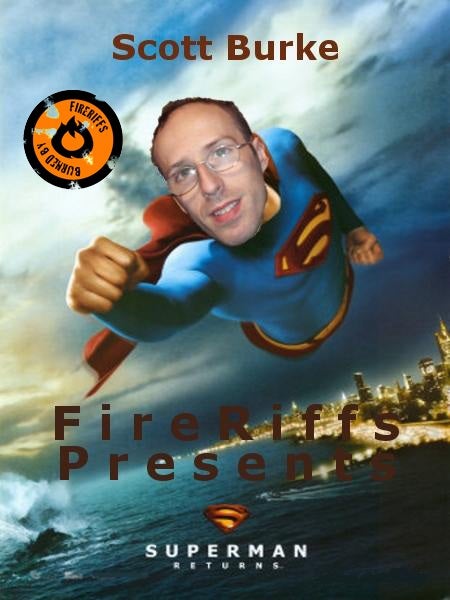