Family friendly movies have always been a big cash cow.  Parents can take their kids to it without fear of their children being exposed to anything inappropriate for them.  Josh Kirby Time Warrior:  Planet of the Dino Knights, is one of those movies.  Or is it?

Josh Kirby, a 14 year old boy who is such a loser that even wrist watches would rather be dead than be associated with him, stumbles across a piece of the nullifier in his doghouse.  The nullifier is a device from the 25th century that is capable of destroying the universe.  By doing so he gets mixed up with a 25th century scientist named Irwin 1138 (it's like Smith in the future) who is traveling through time trying to retrieve the nulifier pieces before the evil Doctor Zoetrope 366 (the Jones of the 25th century) finds them.  Apparently Zoetrope wants to assemble the nullifier and destroy the universe... and himself along with it.  Seems rather counter productive but who am I to judge?  Their first stop on their time traveling adventures:  medieval England.  There they discover that the evil Lord Henry has a dinosaur that has been displaced in time by Dr. Zoetrope and is using it to steal his brother's barony.

Along for the ride is Asibeth Seige; a feminist "warrior" who befriends Josh and Irwin after knowing them for all of five minutes before being captured by Lord Henry.  Can Josh save Asibeth and the kingdom?  Do we really care?  Probably not.  This movie also features:  human sacrifice, voyeurism, a pedophile, attempted rape, a creepy troll doll, and a flaming ten year old.  Yes, it's wholesome fun for the whole family.   So join me as I riff the first chapter of the Josh Kirby Time Warrior series. 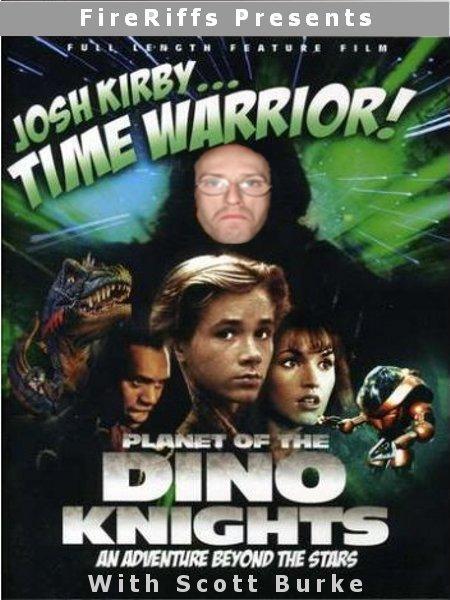