"In the violence of the night, where you hear the silent screams... He only knows where he is going to... Like a dream within a dream."

In keeping with our Uncut Series tradition, we roasted Laser Mission one night not knowing what we were getting ourselves into. The commentary track is entirely improv and was recorded during our first viewing. Just a random selection from a collection of crap movies in our posession, only later did we find out that this one had already been tackled as an iRiff. In the meantime, as it turns out, the RiffTrax guys themselves have also taken it to task, which means that we've got some pretty healthy competition on this one. Under any other circumstances we might be afraid to release it, but dammit -- we're the FilmRoasters. So here it is.

Any similarities between the riffs are either pure coincidence or the consequence of great minds thinking alike (or just making jokes about the painfully obvious). However, as a bonus for you, the viewer, we encountered a pretty severe glitch partway through the video that ultimately wound up lending itself to the funny. We like to think of this as the "Director's Cut Wormhole Edition." Nonetheless, you'll be getting a Laser Mission like you've never missioned a laser before.

This VOD is of a higher quality file than what we've released in the past. In addition, we've included printable, hi-resolution DVD box and label artwork! As Satan would say, "Enjoy the film." 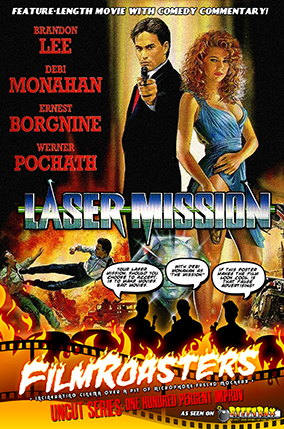