Film Is Pwn vs. Transformers: Revenge of the Fallen

Film Is Pwn vs. Transformers: Revenge of the Fallen

Countless 8 year-old boys who grew up in the 80s -- the only decade in the modern era that considered Rick Moranis "funny" -- spent many an afternoon playing with Transformers, if they had expertly whined enough to force their Mom into buying them some.  These boys would often spend hours crouched around the little plastic toys, concocting stories that never fully made sense with characters they didn't particularly care about because it was all an excuse to get to the next fight scene wherein cars that turn into robots engage in rock 'em sock 'em kickboxing for galactic supremacy.

In a sense, Michael Bay is like those delightfully asinine 8 year old boys.  Except that Mr. Bay was granted $200 million dollars to put his childish fantasies on film, hire gorgeous actresses to participate in the silliness, and convince great actor John Torturro to don a Speedo for a film that was shown on IMAX screens around the country and can now be enjoyed in the crystal clarity of Blu Ray. *shudder*

There is no doubt that for decades, film students, riffers, historians, and dental hygienists will be examining Transformers Revenge of the Fallen in an attempt to understand what made it the most profitable film of 2009.  Why not start right here and join Film is Pwn's very own Brian Alterman, Daniel Roos, and Tom Stephens as they meet the challenge of a two hour, twenty minute blockbuster featuring nothing but unfunny comic relief characters and digital robot fights!  Join us, won't you?

* Please note this is an iRiff made to be compatible with the theatrical edition, and may not sync quite as well with an IMax edition being sold at Wal-Marts, which apparently have a few additional seconds of footage (although who wouldn't want that)?  Also our sample got taken down by Youtube, so we've replaced it with the audio intro to the iRiff along with a few funny pictures. 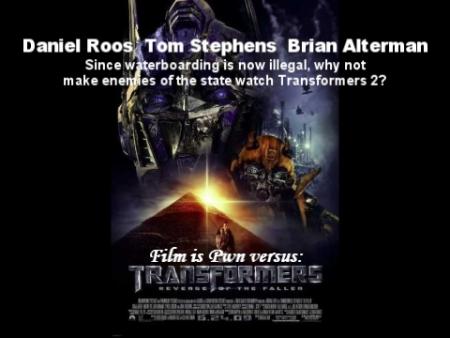