Film Is Pwn vs. Monster Squad

Film Is Pwn vs. Monster Squad

Not unlike the Wolfman, Film is Pwn has Nards.  And to prove our Nard possession, we are tackling this *cough* gem from the 80s just in time for its grand re-re-release on Blu Ray (no, seriously).

While we don't think it's possible to make a case that Monster Squad is a "good" movie, it's equally hard to argue that Monster Squad is not fun.  Sure the plot has holes big enough for Jabba the Hut to build a summer house in with room for a swimming pool; sure the rogues gallery is completely anemic other than Dracula, and even Drac uses his amazing powers to do stuff like lighting the fuse of Acme dynamite; sure the heroes are snot-nosed brats whose primary weapon is a kick to the nardulars and a compious serving of luck; sure there's homophobic dialogue and oodles of cruelty to the fat kid constantly referred to solely as "fat kid;" and sure there are plenty of other "sures" we're sure we left out.

But if Monster Squad was part of  your childhood experience, what better way to relive it than with the dulcit tones of Brian Alterman, Tom Stephens, and Daniel Roos poking fun at it along the way?  If you've never seen or heard of Monster Squad, what better reason to go check out it and endure -- I mean, enjoy -- it for the first time with the hilarious iRiff from your favorite cinematic masochists, the aforementioned Brian Alterman, Tom Stephens, and Daniel Roos? 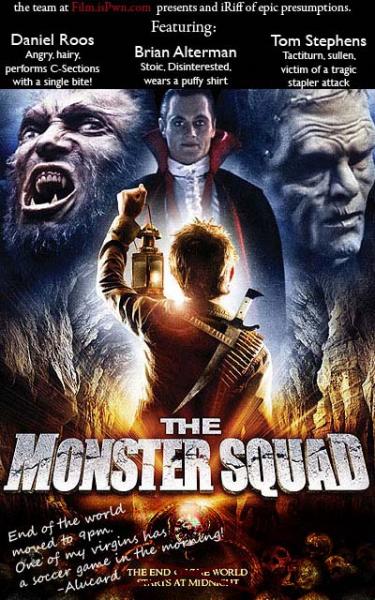