Film Is Pwn Does Rocky Jones

Film Is Pwn Does Rocky Jones

Before Flash Gordon ever whipped open his trenchcoat at a Chucky Cheese, there was a different kind of pervert permeating our old future: Rocky Jones, Space Ranger.  Rocky is like a Texas Ranger, except his range is the one thing bigger than Texas: SPACE!

Along with his perky, vaguely effeminate sidekick Winky, Rocky stubbornly defends the final frontier from its greatest danger.  That danger is WOMEN, of course.  Yes, Rocky is greatly disturbed when his latest mission -- to rescue Professor Colonel Sanders and his Boy Toy Bobby from the evil planet Fecies -- requires that he take along a female womanly girl, Vena!  Well before the Muppets brought the world "Pigs . . . IN SPACE!" Rocky Jones assigns the perky Vena the task of knitting him a sweater . . . IN SPACE!

Brian Alterman, Daniel Roos, and Tom Stephens are your riffers as we explore this *cough* "classic" 50s sci-fi cheese.  Children of the Eisenhower administration witnessed first hand the horror of the Space Military Industrialist Complex, in this Film Is Pwn presentation of Rocky Jones: Beyond the Curtain of Space, Part 1!  It's 25 minutes of riffing pwnage for only $.98!!! 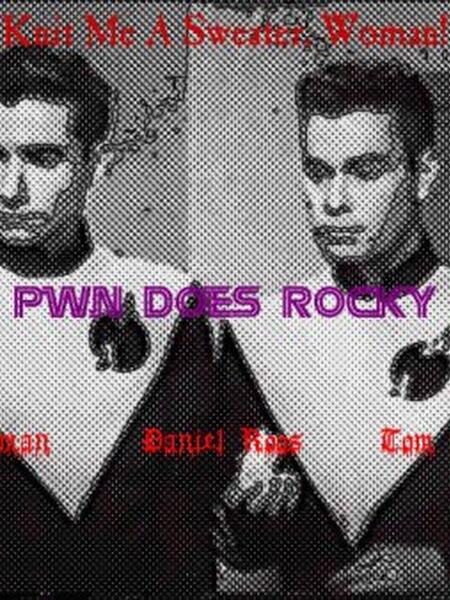