This was the FINAL installment in the original GAMERA film series, and is quite possibly the WORST!  Evil alien invaders (AGAIN?  Don’t these stupid aliens ever learn?) from the planet Zanon attack Earth in an Imperial Star Destroyer they apparently borrowed from Darth Vader.  Earth is now under the protection of a trio of alien Superwomen, but Zanon has its own EVIL alien Superwoman to combat them.  Zanon also revives ALL of Gamera’s old opponents—Gaos, Zigra, Viras, Jiger, Guiron, and Barugon—to attack Japan.

Fortunately, Gamera has now been promoted from a plain, ordinary monster to a “SUPER MONSTER”, so he’s more than up to the challenge!  UN-fortunately, this results in endless amounts of stock footage battles being recycled from past GAMERA films.  GAMERA SUPER MONSTER is actually like having to watch all seven previous GAMERA films at once!  My God, can you even begin to imagine the HORROR?!?

Of course, there’s the usual annoying, squeaky-voiced kid crying, “Gamera, Gamera!” over-and-over.  This movie also has a surprising, shock ending that you’ll never believe…so we might as well just go ahead and tell you, since you won’t believe us anyway—Gamera actually DIES!!  Yes, Gamera is DEAD—he’s gone, he’s finished, he’s history, stick a fork in him ‘cause he’s done!  But there’s no time to mourn just yet, because as someone once said:  “This may be your last GAMERA film, but there’s no guarantee you’ll survive it!”

But if you think the movie is far out, wait until you see our FUNERAL FOR GAMERA!  Fanboy Sci-Fi Theater puts the "FUN" back in Funeral with this special iRiff. 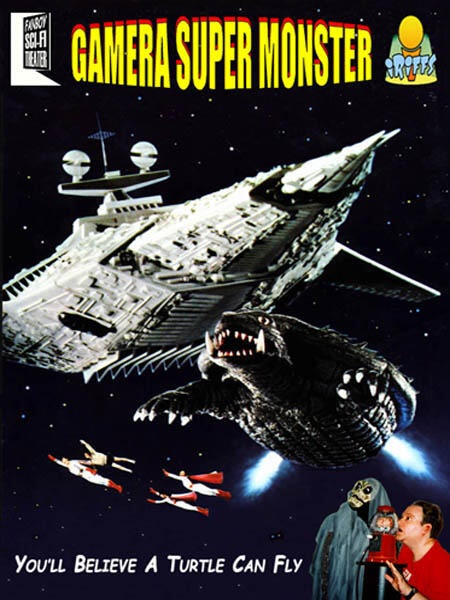