The 1996 Schwarzenegger film Eraser has everything you want in a 90s action flick: awful one-liners, crazy villains, a specialized government agency full of corrupt employees, a bad guy with a scar on his face, henchmen who don't shoot when they're supposed to and who miss when they do, and a climax at (drumroll please) THE DOCKS!

Eraser also breaks new ground. Ah-nuld battles against CGI alligators, drag queens, and even gravity itself. (True, he doesn't actually fight the drag queens, but he seems to enjoy being around them.)

This movie comes with a handful of timeless lessons (seriously!).

And yes, you read correctly - there are CGI alligators. They roar like lions! James Caan is also in this movie. He doesn't roar so much, but he does give up control of his neck fat on a number of occasions, and we must say, it's very impressive. If you don't enjoy our riffing, we hope you at least marvel at his neck fat. Even if you do enjoy our riffing, take a moment to reflect on the neck fat anyway. You'll thank us. 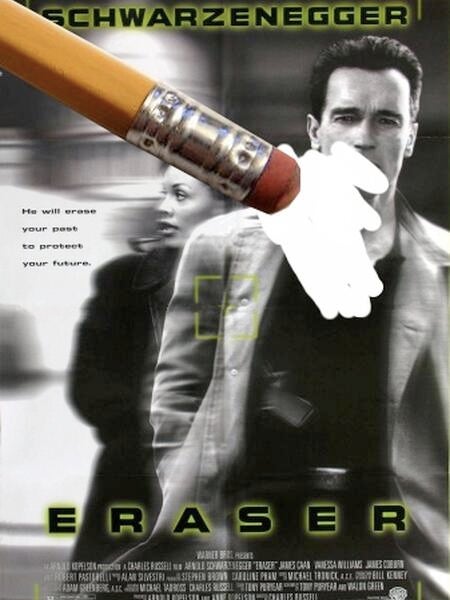