It can be argued that you can count all of the good comic book adaptations on one hand. Now, if said hand was forced into an industrial, hot tub-sized meat grinder, leaving only one gnarled finger, I can be sure that that tenacious digit could only represent one film: The Story of Ricky. If you think you'll see a tale of how one plucky fat girl got pulled from obscurity by a flamboyant director only to go on to host a daytime talk show and document her baby being born in a bath tub, you will be wrong. If you think you'll see a gritty, futuristic (2001!) prison drama about a wrongly imprisoned boy with superhuman strength fighting with all his might against a corrupt system, you still aren't quite on the mark. If you think you're going to see an incredibly stupid parade of badly choreographed fight scenes and unrealistic special-effects gore, all held together with unintelligible dialogue and a frayed-dental-floss thin plot, you, my friend, are now ready to bear witness to The Story of Ricky. Join Drawback Productions (me and my disinterested wife) as we punch holes through the hypnotic train wreck that is Riki Ho, Story of Ricki, or The Story of Ricky (depending on which side of the DVD box you're looking at). [WARNING-While the Riff itself is no more than a PG-13, The Story of Ricky is not for the squeamish or those who are easily disturbed by exploding jelly molds. Unless you are Dexter's dad, training your child for life as a serial killer, viewer discretion should be advised.]  The full movie is available in English (which is the audio that you should watch the riff with) here:  http://youtu.be/OyXohnrEXVA 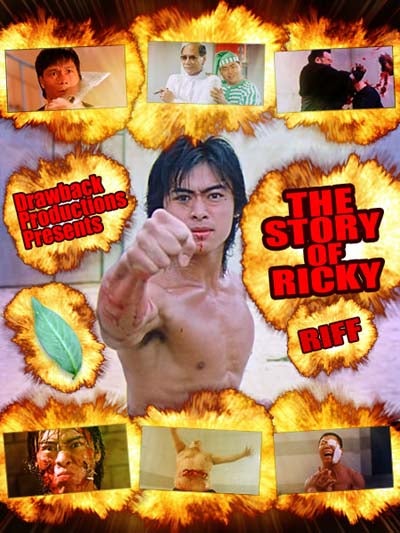