It isn’t often that a motion picture holds a mirror up to its audience, forcing them to look at and ultimately into themselves and ask an uncompromising question.  In the case of Die Hard 2, that question is, “Did I really need the Die Hard Box set when I would’ve been fine with the first film alone?”  Those unsatisfied with how hard they died the first time around will answer this question with a resounding “Yes”, as it is those folks who need-- nay, DEMAND… to Die Harder.

Moonlighting’s Bruce Willis battles terrorists at Christmas once again, all the while winking at the preposterousness of the very movie he’s in with lines like, “Here we go again”, “Story of my life,” and, “What am I, a terrorist magnet?”

Continuing our series of films you probably already own, Drawback Productions is proud to admit that we like money, and we know you’re more likely to watch riffs for movies that are sitting on your DVD shelf.  Join me, Dru Brock, and my wife, Megan*, as we undergo the world’s most transparent cash grab outside of any movie that starts with the credit “Hasbro Presents”.

ALSO INCLUDED:  A bonus riff for the Highway To Heaven, Season 2 masterpiece, “The Torch,” at no extra charge.

****I realize these footnotes are becoming a crutch.  I’ll refrain from using this sloppy, lazy device in the future.***** 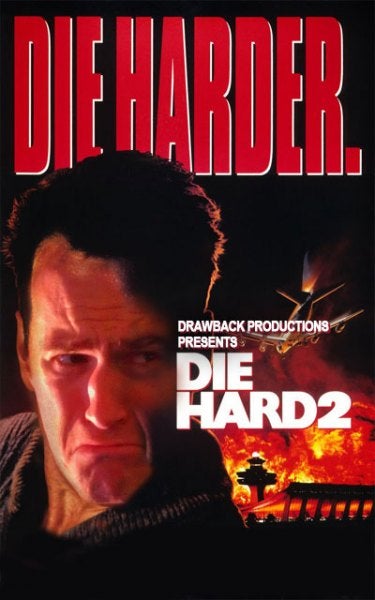