Science fiction, double feature. A great philosopher’s painted red lips said that once. And, in honor of that most exalted song, Doug presents a Father’s Day special: Doug’s Double Feature! On one hand is Horror Express! What kind of express? ‘Horror?’ Well, I’m just going to wait for Naked Cheerleader Express, if you don’t mind. Peter Cushing, Christopher Lee, Telly Savalas and more facial hair than an Amish ZZ Top concert took a weekend off and decided to take a train ride with a monster. Never before has a movie asked “What’s in the box” more forcefully without it being Gwyneth Paltrow’s head. Never before have we seen Peter Cushing and Christopher Lee on screen together, except for all those other times they were on the screen together. And if you like jokes about a monk that looks like both Allan Moore AND Rasputin, then, lady and/or gentleman, you have come to the right place. The second hand holds the film reels to possibly the worst movie in the history of Maryland. Drunken rednecks, guns, community theater and a space alien that just kind of walks around. Take those elements, put them in a blender, add a fifth of gin and you’ve got Galaxy Invader! Even though it’s never explained why the Galaxy Invaders sent down one guy to constantly get shot and captured by Maryland rednecks, one can be sure that the thing, be it swamp or man, Ted Sallas or Alec Holland, is a total tool in every galaxy. Doug’s Double Feature contains the two movies and the riff, pre-synced for your computer illiterate fun having. It also includes a number of classic drive-in ads to make your experience complete. Both Horror Express and Galaxy Invader will be released separately, but it’s much cheaper to buy them like this, AND it makes a great Father’s Day present. 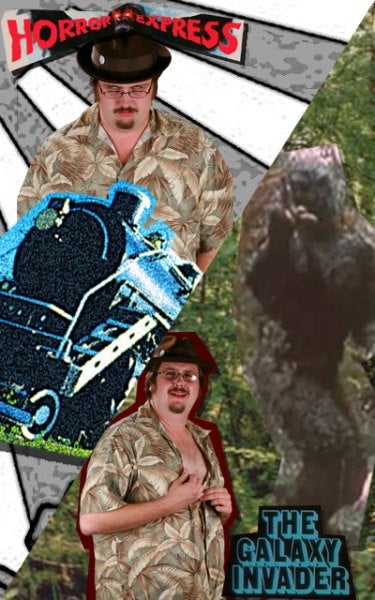