Doom: The One Man Band

Doom: The One Man Band

Doom: the Videogame.  A lone space marine stalks the corridors of a base on Mars, surrounded by monsters from Hell itself.  Armed to the gills with the most devastating weaponry imaginable, you must wade through thousands of monstrosities until everything that's not you lies dead in your path.  Doom: the Movie.  Based on the videogame, a team of space marines stalk the corridors of a research station on Mars, occasionally pestered by one or two genetic mutations.  Barely armed, their job is to keep as many people alive as possible while whining about everything.

Well, they got Mars right, at least.

The "Dwayne Johnson" Rock stars as Sarge, the tough-as-nails Marine...um, sergeant, alongside Karl "Bones McCoy" Urban, as well as...um...yeah, about that.  Anyway, the most British/New Zealand-sounding U.S. Marines ever are called in to find out what happened to a group of scientists that disappeared under mysterious circumstances (if you call recordings of people being eaten mysterious, but what do I know?).  As trained professionals, they handle themselves with dignity and respect...until the monsters show up, at which point they start shooting at everything and everyone, yelling at each other, picking on the handicapped gentleman, and make sure corners are secure.  And then there's Portman.  Ohhhh, is there ever Portman.

And don't forget the 1st-Person segment, so reminiscent of the video game that you'll shout, "I waited an hour and a half for THIS?!?"

Join the One Man Band as he leads the team into the depths of the red planet, looking for survivors.  Odds aren't looking good.

What's that?  You own which cut of the movie?  Well, not to worry.  Both the U.S. R-Rated cut AND the Unrated Extended Cut are available in one easy-to-make purchase.  Why?  Because I like you.  Now watch this or I'll kick your teeth in.

Artwork, once again, by Piobman. 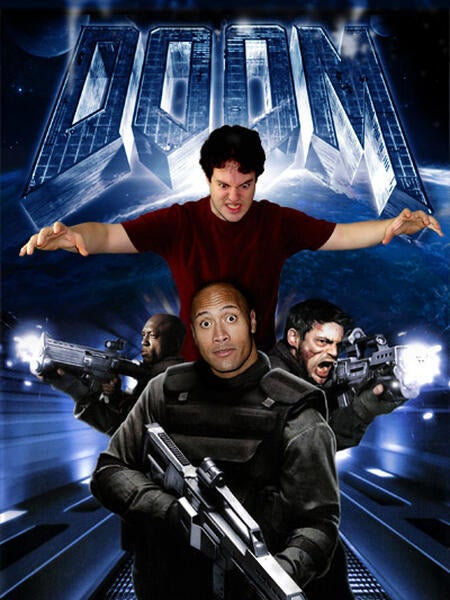