Get the high-quality (320kbps) STEREO version of this iRiff ONLY at DogKnob's website!!!

This is the episode where both Janeway and Harry Wang almost get laid!

Voyager is literally accosted by this dude from Suck-arris, where pleasure is the first order of business. Having destroyed an entire society's concept of Heaven in their previous outing, Ice-On-Mars' Emanations [1st episode on disc], the Voyager gang is more than ready for a little R and capital-friggin' R!

But NOOOO! The Suck-arrians have their own version of the Prime Directive and refuse to share their space-folding-thingy. Besides, the Suck-arrian Magistrate is more determined to get him some Janeway-tang than Helen Keller was determined to read.

Meanwhile, Seska begins her journey to "the dark side" (which goes full-blown in the following episode, Treacheriffs' State of Flux [3rd episode on disc]) when she convinces Torres and Kerry to mutiny and illicitly obtain the space-folder.

Of course, we're talking about DogKnob here, so alter-egoes abound: Janeway reveals a new personality once she's knocked back a couple, Tuvok becomes Mr. Badass (complete with his own theme music) when Janeway's not around and offers the Suck-arrians Voyager's complete collection of Penthouse Letters in exchange for the space-folder, Torres apparently ate a bad burrito somewhere, and Harry blows it so badly with the Suck-arrian babe that he soon retreats into a complete fantasy world (as we see in Riff Raff Theater's Heroes and Demons [4th episode on disc]).

Cassidy: "My pants are pure Corinthian Leather... and there's candy in them!"
DX Stone: "You're my Mandingo... Half man, half dingo!" 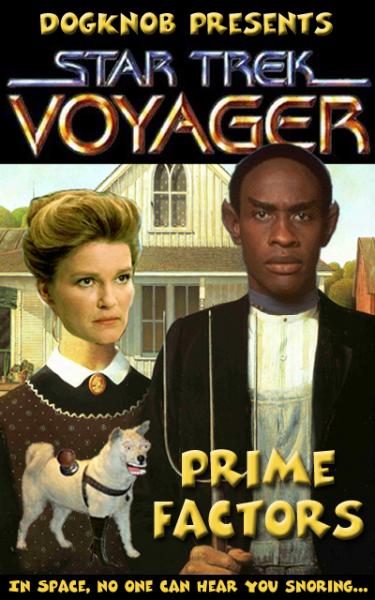