DogKnob presents The Trollenberg Terror (a.k.a. The Crawling Eye) VOD

DogKnob presents The Trollenberg Terror (a.k.a. The Crawling Eye) VOD

Top 3 Reasons to buy The Trollenberg Terror at dogknob.com

2. It is WAY better quality than the version here

3. You can choose to download a DVD-ready MPEG-2 version

Alan Brooks (Forrest Tucker of F-Troop infamy), apparently a professional smoker for the United Nations, can never seem to get a vacation in. When he drops by Switzerland's Trollenberg Institute for Contaminated Cheese Development to see his old equipment-abusing buddy Professor Crevette (and his lab assistants, all of whom are named Beaker [and his recalcitrant computer with its state-of-the-art Windows 58 OS]), he becomes swept up in a whirlwind of addled psychic doublemint twins, narcissistic brits, headless geologists, homicidal zombies, flatulent bartenders, dispeptic local politicians, saucy broads who dress like NFL referees and, thankfully, that sweet, sweet Swiss shizzle.

Poor Alan... All that and he nearly ends up joining the "Kilometer High Club" ...AGAINST HIS WILL!

Yes, yes... this IS the film MST3K originally riffed on its first full-length episode many thousands of years ago; it's that moldy oldie with the alternate title (The Crawling Eye) in its opening credits. THEY had a print that looked and sounded like it had been buried under your Uncle Dad's house for 40 years. OUR print has the original title and looks and sounds WAAAYY better, factors that highlight the film's striking superiority to many 50s B-list horror films.

We also used the latest technology to colorize this golden-era Sci-Fi classic so people under 30 will watch it, then used the same technology to un-colorize it when we realized it looked so very much like one of Ted Turner's freudian dreams as to make us both very, very uncomfortable and, frankly, deeply ashamed of ourselves.

Cassidy: "...in fact, it smells exactly like a hot dog vendor, a rabbi and Bigfoot hiding in the closet!"
DX Stone: "Oh Ann... How many times have I told you? Harder is a terrible safe word!" 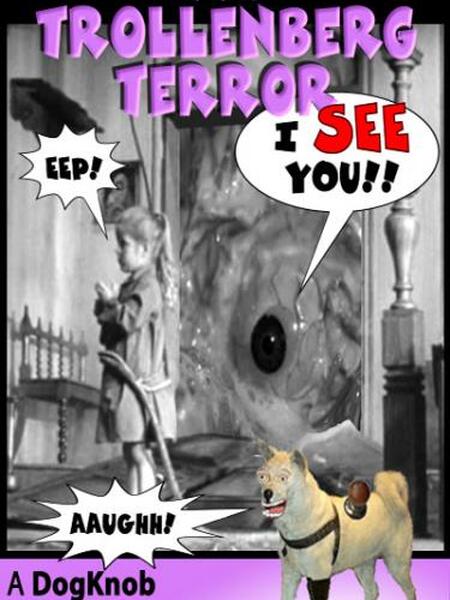