Death Note: The Movie (Presented by The Infinite Losers)

Death Note: The Movie (Presented by The Infinite Losers)

In the land of the Rising Sun, where the blowfish are plentiful and the panties are available for purchase in street-corner vending machines, a young man named Light stumbles upon a miraculous object: a notebook belonging to a Death God named Ryuk. Light discovers that this notebook holds incredible secrets: the fantastic notes Ryuk took in his fourth-hour stats class, some wonderful poetry he penned about rainbows and sunsets and a series of engaging tic-tac-toe games he played with his lesser-demon classmates. There was also another minor secret: any human whose name is written in the notebook will die. But seriously, who would find that trait the least bit interesting compared to finding out which teachers Ryuk has crushes on?

Hailed by some as one of the greatest marvels in all of Japanese manga (and by "marvels", we mean "sources of yaoi fanfiction"), join Marianne Miller, Lucas Schuneman and Martin "LittleKuriboh" Billany along with special guest riffer/writer Kyle Hebert as they put this movie into their mouths --- AND EAT IT!

This iRiff is rated TV-14 for Mildly Offensive Language and Suggestive Situations.  Special thanks to Andee Lewis (aka Soupykins) for our promotional poster and Rinbo for designing Flappy, our audio sync automaton! 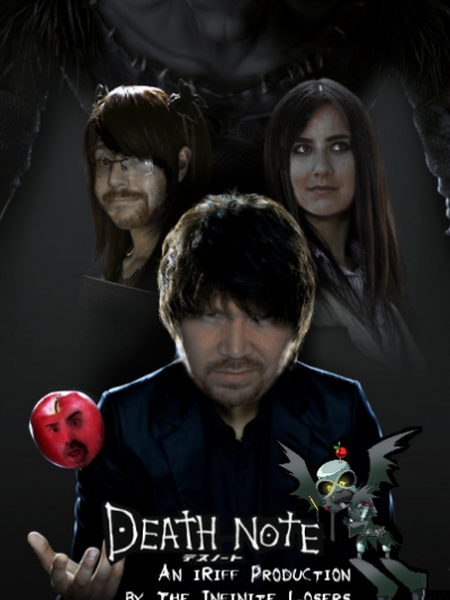