You want to escape from reality for a little bit through a flashy cartoon fantasy? Alright, how does this sound: you are a pilot in a giant robot capable of blowing up tanks with barely the lift of a finger? Not good enough, you say? Okay, how about you also have the power to hypnotize people? Still not enough? Okay, how about we add some hot women that can't wait to get a phone call from you? That's too much on second thought; we're getting unrealistic.

But all of this and more is available to you in Episodes One and Two of the First Season of the kinda-popular anime show CODE GEASS.  Join enterprising new wisecrackers Adam and Dustin as they comment on this fantasy vehicle for nine year-olds of all ages, genders, creeds, and sexual orientations (Except black, thirty-nine year-old lesbian objectivists. They hate this show.)

Available in NTSC and PAL. Episodes are available on youtube (even legitimately), but be ready to pause the iriff during Ads. 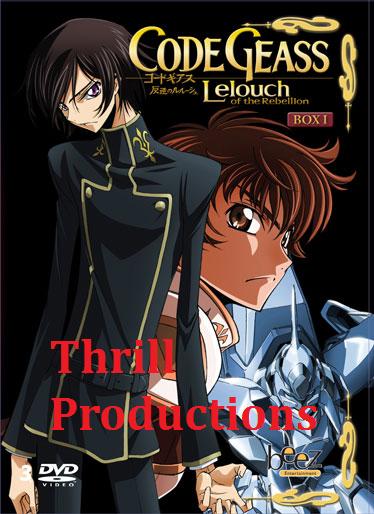