There are two kinds of people in the world: people who were shocked, betrayed, and angry about the Star Wars prequels, and people who've seen "Willow".

Proving that maybe he's not the legendary story-teller he claims to be, George Lucas brings us the story of Willow, an... elf? A dwarf? Like, is he a magical creature? Or is he just short? Are there just regular short people in this world? Do the rest of the world make all the short people live in adorable little farms in the middle of the woods, or did they choose to live there? And is seriously nobody bothered by how many of these guys George Lucas seems to have on his speed dial?

Anyway, to save his village from some vague, unspecified destruction, brave young Willow must go on a generic quest to return a Macguffin baby to a place. Stout of heart but small of step, Willow is joined by idiot swordsman Val Kilmer, as well as Kevin Pollack and some other dude doing a "Two Wild And Crazy Guys" sketch in front of a green-screen for most of the movie. Along the way, they... fight evil, I guess? And get captured a lot. And there's technically a dragon, I think.

Cinester Theater invites you to join them for one of the most banal fantasy adventures in the history of film! So strap on your sword and find your magic ring (whoops, wrong franchise) and get ready for "Cinester Theater Presents: Willow"! 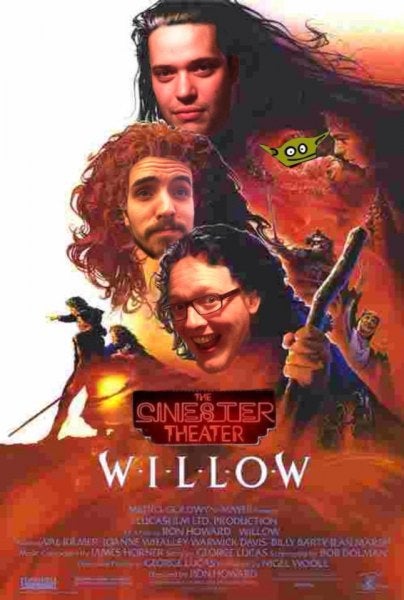