"Stephen King's IT" is the worst of the worst, a made-for-TV disaster starring Tim Curry, the kid from "The Neverending Story II", and just about every late 80's/early 90's sitcom star you can shake a stick at. And like the book, the movie-version is about twice as long as it really should have been.

Shawn and Keith of "Cinester Theater" take on 50% of this horrifying tale of terrible terror. The children of Derry, Maine are being hunted by a malevolent shape-shifting demon named Pennywise The Dancing Clown, the least successful movie monster of all time. When the body-count reaches an unacceptable ONE, its up to the Little Rascals... uh, I mean, the Goonies.... uh, I mean, The Losers Club... to save the day! With friendship! And silver ear-rings! And we can't even begin to explain how awful this movie is!

After watching this riff, be sure to head over our colleagues at Hor-RIFF-ic Productions for "Stephen King's IT: Part Two"!

Note: Due to technical problems, we left out most of the sync lines for this riff. We have one near the beginning of the movie- if that is synced properly, then you're good to go. 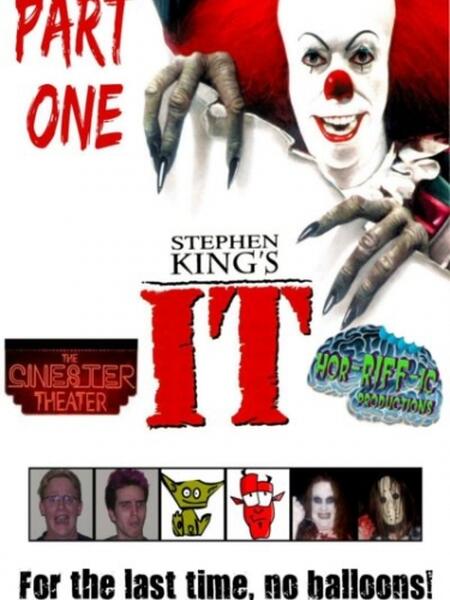