Movies have taught us an awful lot about robots. They're stronger, faster, and smarter than us. Their emotionless faces of tempered steel can hide a childlike sense of innocence and wonder, or an unquenchable thirst for murder and destruction. They'll take our jobs. They'll steal our hearts. And one day, they'll probably all rise up and kill us. It's all part of the magic of robots, and the reason we're pleased to bring you the story of ROBOCOP.

When a rookie policeman is shot a thematically-appropriate 750,000 times by a gang of ruthless criminals, a multimillion-dollar corporation decides to turn his corpse into the last word on law-enforcement. They jam the spongy mess into a human-shaped tin can, redub it ROBOCOP, and waste no time putting all crime in Detroit in the emergency room with 400 lbs of titanium-steel law enforcement pounded directly into their spine. But when forces within the corporation begin to conspire against him, ROBOCOP is in for the fight of his life as he must battle not only the police and the goons that killed him, but also ED-209, a rival battle-bot that's as deadly as he is adorable.

Join Shawn and Keith as they don protective suits of cybernetic-comedy and shake hands with another Verhoeven masterpiece, ROBOCOP! It will be 90 minutes of side-splitting entertainment that you'll need a total mind-wipe to forget! And even then, we're betting you'd still get weird flashes of how hilarious it was in your new life, prompting you to embark on a death-defying adventure to discover the truth! That would be fun, right?

Note: The iRiff syncs up with the R-rated version of "ROBOCOP", not the Unrated version. The Unrated version is only a few seconds longer and contains a little more violence; it should be usable with this iRiff, but you will have to resync the audio every so often to make it work. 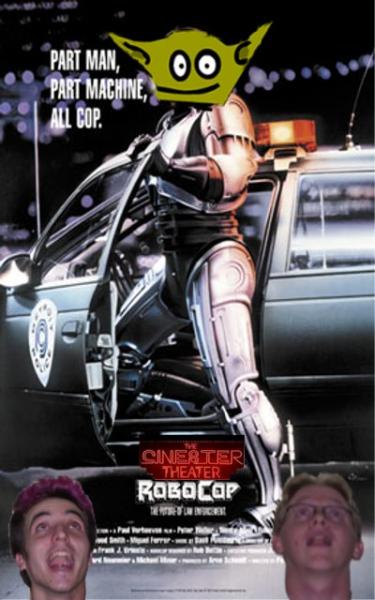