The "Resident Evil" game series has been hugely popular over the years, mostly by masterfully combining all the fear and confusion of being stuck in a zombie attack with all the fun of pushing statues around and looking for hidden keys. With a reputation for having some of the most hilariously voice-acted cutscenes in video-game history, the series' increasingly absurd plotline never seems to get the thorough explanation it deserves. What's Capcom's answer to this problem?

A full 90 minutes of exposition.

A movie that believes in "tell, don't show", "Resident Evil: Degeneration" has everything you love about the game series: test tubes, bad voice-acting, and more exposition than an instruction manual. Starring "RE2" heroes Leon Kennedy and Claire Redfield, "RE:D" proves that a zombie movie doesn't need isolation, interesting characters, or zombies!

Sit back and enjoy as Shawn and Keith of "Cinester Theater" take you on a fantastic voyage of hilarity. Thrill as we try to survive the horror of survival-horror in "Resident Evil - Degeneration"! 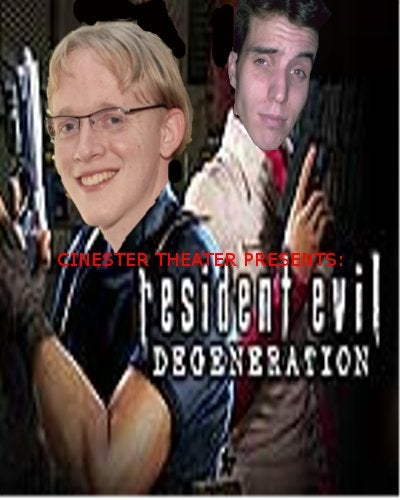