The 1970's have a lot to answer for: disco, terrifying facial hair, bell-bottoms. "Planet of Dinosaurs" is basically a primer for all of them- a glimpse at life in a simpler, hairier time when scenes were ruined by bad claymation instead of bad CGI.

When the crew of the Odyssey, part of the most inept space-exploration force in the known galaxy, is marooned on a distant planet, they prepare to make the best of things on this new world by tying some sticks together and calling it shelter. But when they find out that they're sharing the neighborhood with hordes of man-eating dinosaurs, it becomes a race for survival, expertly depicted by scene after scene of monotonous walking set to synthisizer fart-noises mistakenly labeled as "music".

Join Shawn and Keith of "Cinester Theater" as they take on this stinker from long ago. Also, they're joined by guest-riffer Syncy The Sync Goblin, who brings his unique brand of goblin vitriol to the group. Together, they form a comedy trifecta against which even the hungriest dinosaur is powerless to resist!

This product is VOD, which means the movie and the riff are both included!

Note: There are technical difficulties with this riff. The video freezes in several places while the audio continues to play. The video automatically catches up with the audio after the picture unfreezes. At this time, we don't understand why this problem is popping up or what steps to take to fix it. We're leaving this riff up for sale because the problem isn't so bad that the video is rendered unwatchable, but it can be a little annoying. 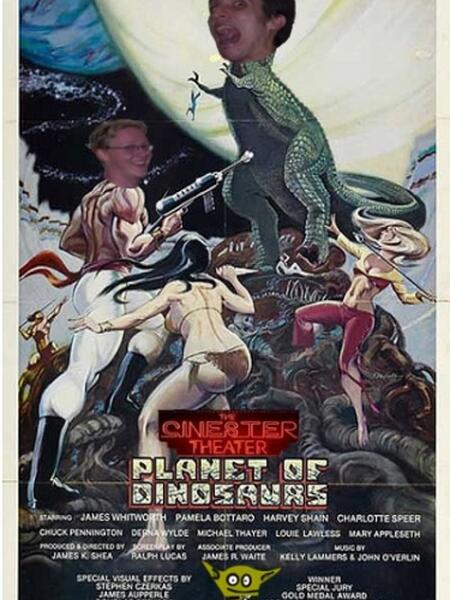