Who says learning can't be fun?

After a series of failed attempts to riff sci-fi/fantasy/action movies like "Waterworld" and "Planet of the Apes", Cinester Theater is down to their last DVD... an ancient, dusty copy of "March of the Penguins" that has never been opened. It's a heart-warming tale of love and survival at the bottom of the world... and it's slower than the glacier it was filmed on.

Join Shawn and Keith as they become experts on the sex-lives of penguins! It's 80 minutes of ice, snow, wind, and penguin pornography that you'd have to have a heart as cold as ice to resist! With more Morgan Freeman and dead penguin babies than you can shake a stick at, "Cinester Theater Presents: March of the Penguins" is proof that learning doesn't need to boring... but it usually is! 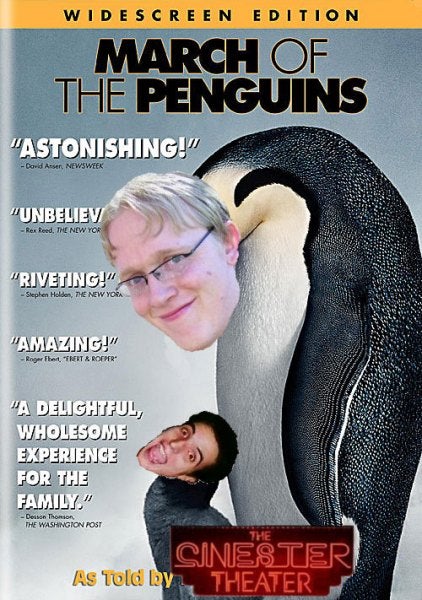